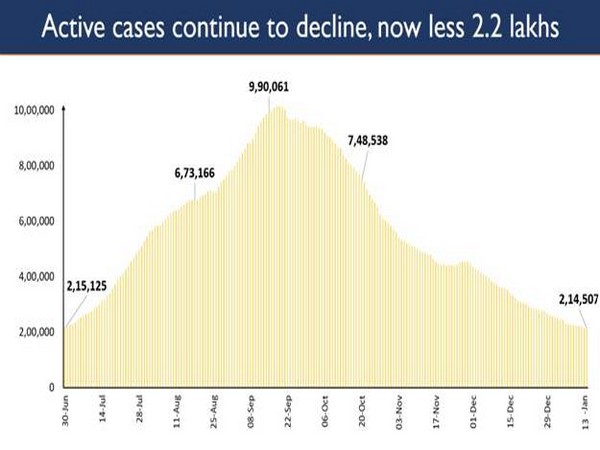 New Delhi [India], January 13 (ANI): India's active caseload of COVID-19 has fallen to 2,14,507, which is the lowest after 197 days, according to the Ministry of Health and Family Welfare on Wednesday.

The share of active cases in the total positive cases has further shrunk to 2.04 per cent. The total active count was 2,15,125 on June 30, 2020.
A net decline of 2,051 cases has been recorded in the total active cases in the last 24 hours.
The daily cases in the country are registering a consistent decline on a daily basis. Less than 16,000 daily new cases (15,968) were added to the national tally in the last 24 hours.
On the other hand, 17,817 recoveries were registered in the last 24 hours. Recoveries outnumbering new cases have ensured a steady fall in active cases.
The total recovered cases stand at 10,129,111 which translates to a recovery rate of 95.51 per cent. The gap between recovered cases and active cases continues to grow and presently stands at 99,14,604, the Ministry said.
81.83 percent of the new recovered cases are observed to be concentrated in 10 States/Union Territories.
Kerala has reported the maximum number of single-day recoveries with 4,270 recoveries, followed by Maharashtra and Chhattisgarh with 3,282 and 1,207 daily recoveries respectively.
74.82 per cent of the new cases are concentrated in 7 States and UTs.
"Kerala reported the maximum daily new cases numbering 5,507 in the last 24 hours. Maharashtra recorded 2,936 new cases while Karnataka reported 751 new cases yesterday," as per the government's data.
Seven States/UTs account for 70.30 per cent of the 202 case fatalities reported in the past 24 hours.
Maharashtra reported 50 deaths, while Kerala and West Bengal registered 25 and 18 new deaths, respectively.
The COVID-19 vaccination drive is scheduled to kick start from January 16, 2021.
The roll-out of COVID-19 vaccine will provide priority to the healthcare workers and the frontline workers who are estimated to be around 3 crores, followed by those above 50 years of age and the under-50 population groups with co-morbidities numbering around 27 crores.
The total number of persons found to be positive with the new UK variant genome has reached 102 today.
India reported 15,968 new COVID-19 cases and 202 deaths in the last 24 hours, as per the Union Health Ministry. (ANI)