India's share in global commercial services exports up at 3.5 pc 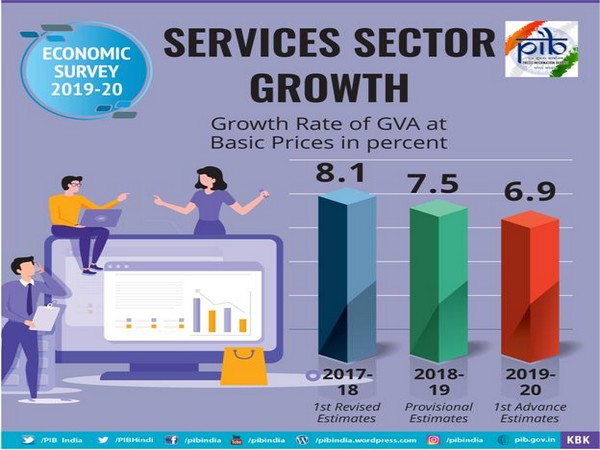 New Delhi [India], Jan 31 (ANI): The services sector accounts for about 55 per cent of the economy and gross value added (GVA) growth, according to the Economic Survey 2019-20 tabled in Parliament on Friday by Finance Minister Nirmala Sitharaman.

The sector accounts for two-thirds of total foreign direct investment (FDI) inflows into India and about 38 per cent of India's exports.
The survey said the services sector saw 33 per cent jump in the gross FDI equity inflows during April to September 2019, touching 17.58 billion dollars. This was driven by strong inflows into sub-sectors such as information and broadcasting, air transport, telecommunications, consultancy services, and hotel and tourism.
Services exports have outperformed goods exports in the recent years, due to which India's share in world's commercial services exports has risen steadily over the past decade to reach 3.5 per cent in 2018, twice the share in world's merchandise exports at 1.7 per cent.
From a long term-perspective, the survey said focusing on boosting service exports during bilateral trade negotiations augurs well for India in mitigating bilateral trade deficits with trading partners.
Within the services sector, tourism services are a major engine of growth, contributing to GDP, foreign exchange earnings and employment. However, growth in foreign exchange earnings slowed in 2018 and 2019 in line with global trends.
The IT-BPM industry has been the flag-bearer of India's exports for the past two decades, with industry size reaching about 177 billion dollars in March last year. The sector contributes significantly to the economy via employment growth and value addition. Besides, the Indian start-up ecosystem has been progressing and is now the third largest in the world with 24 unicorns.

However, the turnaround time of ships, which is a key indicator of the efficiency of the ports sector, has been on a continuous decline, almost halving between 2010-11 and 2018-19 from 4.67 days to 2.48 days.

India's space programme has grown exponentially since its modest beginnings five decades ago, moving from simple mapping services to many more uses currently. Even though India's spending is less compared to others, ISRO has launched five to seven satellites per year in recent years with almost no failures.
(ANI)