Indore: Ahead of Dussehra, Ravana effigy makers face financial crisis due to COVID-19 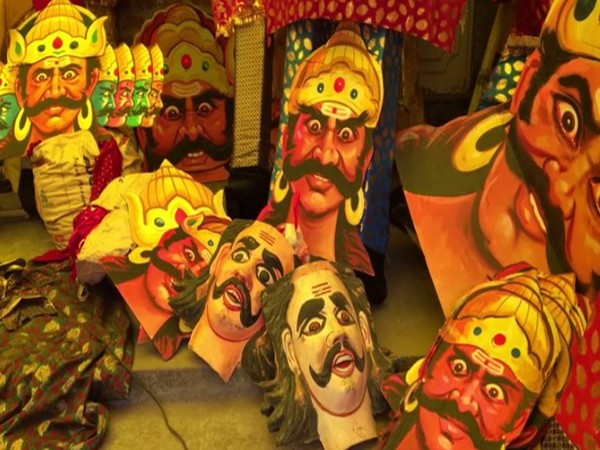 Indore (Madhya Pradesh) [India], October 14 (ANI): Ahead of Dussehra, Ravana effigy makers in Indore are facing a financial crisis as people are less interested in buying effigies amid the COVID-19 pandemic.

Speaking to ANI, Shashikant Raut, an effigy maker said, "I have been making Ravana effigies for 15 years and used to sell 250 effigies every year. But this time, I have prepared only 100 effigies on order due to COVID-19 pandemic and inflation."
He further said that the cost of making these effigies have been increased due to inflation, but customers are demanding these statues at older prices only.
"Around 15 workers and 5 family members are involved in making Ravana effigies. After the government issued guidelines on the Ravana combustion, we started preparing these effigies," Raut added.
Rupesh Jain, another Ravana effigy maker said that he has prepared only 75 small effigies due to less demand and government restrictions on public celebrations.
"Every year we used to prepare around 250-300 effigies. But now, we have made only 75 small effigies because people are asking for small and cheaper statues due to government restrictions on public celebrations. People are also facing a financial crisis, due to which the demand has changed," Jain said.
Dilip Jagtap, an artisan from Indore, said, "Earlier, we used to make idols of Durga and Ganesha in which my family members were also involved. But due to COVID-19, we left the work as the demand was very low and I am now working in a factory to make Ravana effigies." (ANI)