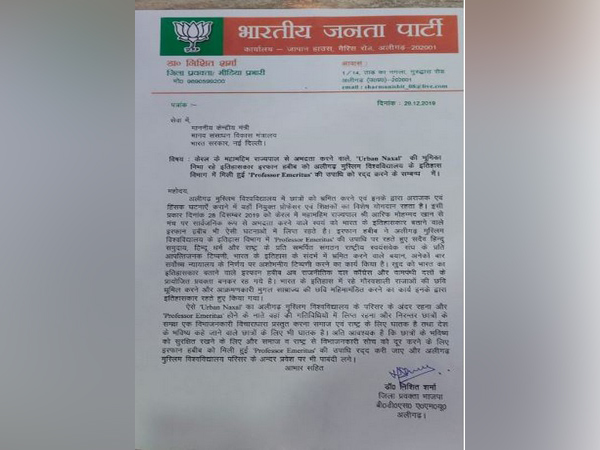 Aligarh (Uttar Pradesh) [India], Dec 30 (ANI): A BJP leader has written a letter to Union HRD Minister asking him to revoke the "Professor Emeritus" status given to historian Irfan Habib alleging that he inculcates divisive views among students of Aligarh Muslim University (AMU) against the Constitution, Hindu community and country.

Aligarh BJP Spokesperson, Nitish Sharma has also requested that Habib should not be allowed to enter the premises of AMU.
"It is highly dangerous for such Urban Naxal to stay inside the premises of AMU and present his divisive views among students. This is dangerous for the country, society and students. He has always presented views against the orders of the Supreme Court, Constitution, Hindu society etc," read the letter.
"In order to secure the future of students it is essential to revoke his "Professor Emeritus" status and not allow him to enter the premises of AMU," it read.
Kerala Governor Arif Mohammad Khan on Sunday said that historian Irfan Habib had tried to charge at him at the inauguration of the 80th Indian History Congress at Kannur University.
Earlier on Saturday, the inauguration of 80th Indian History Congress at Kannur University witnessed unruly scenes with some delegates staging a protest against the Kerala Governor while he was delivering the inaugural address.
The protestors raised placards against the Citizenship Amendment Act and also shouted slogans. (ANI)