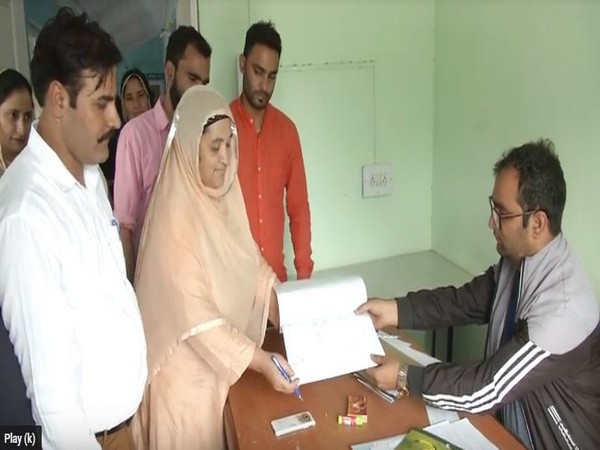 Doda (Jammu and Kashmir) [India], Oct 12 (ANI): In all, 34 women including a 64-year-old have filed nominations in the district for the coming Block Development Council (BDC) elections, scheduled to be held on October 24.

District Development Commissioner Dr Sagar Dattatray Doifode told ANI that so far 94 nominations have been received from 17 blocks in Doda. "The women's participation is quite good this year. I am glad to tell you that over one-third of candidates are women," he said
Around 1,900 voters will elect 17 councillors one in each block and Ghat is the oldest rural development block of Doda district with 126 voters.
In Ghat block, 64-year-old Sharifa Begum has filed her nomination for the post of councillor. She was elected as the Sarpanch for the Ghat Panchayat in the last Panchayat polls.
"I will work for everyone's welfare. I personally know each and every household and very well aware of their problems. If I win, I will bring development in this area," she said.
Another candidate, Lalita Devi appreciated the government's decision of providing quota to women in the BDC polls.
"I have filed my nomination for the BDC election. I will work for the poor people and women's empowerment. I will encourage girls and women to go ahead in every field in order to become independent," she said.
BJP president Amit Shah had recently conducted a meeting with the party's local leaders to take stock of poll preparedness in Jammu and Kashmir.
However, the Congress party has announced that it would boycott the coming BDC elections in the region.
It is to note that the BDC polls will be the first elections to be held in Jammu and Kashmir after the revocation of its special status given under Article 370 on August 5.
The last date of filing nomination papers was October 9. The dates of scrutiny and withdrawal were October 10 and October 11 respectively.
The results will be announced on the day of polling -- October 24. (ANI)