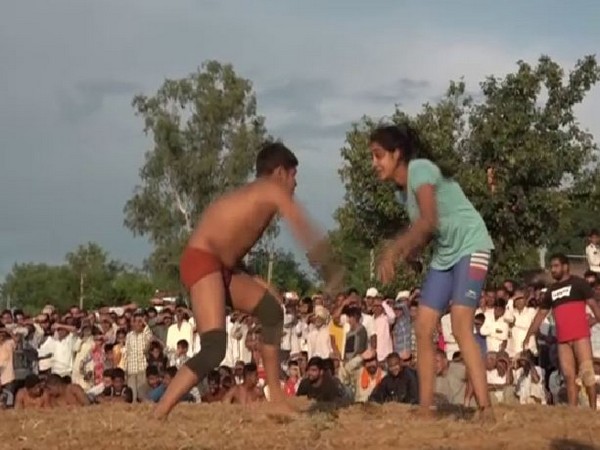 Kathua (Jammu and Kashmir) [India], Oct 12 (ANI): Every year just after the festival of Vijaydashmi, Budhi village here hosts a wrestling match organised by the Sarpanch and other panchayat members, with the larger aim to inspire the youth of the area to be physically fit and adopt healthy habits.

Spread out over two days, the rural 'dangal' (wrestling) follows a century-year-old tradition of the village and is organised annually by a wrestling committee led by its Sarpanch and other members.
"This Dangal (wrestling) is a hundred-year-old tradition of Budhi village where wrestlers from Punjab, Himachal Pradesh and Haryana come and participate. The wrestling will also inspire the youths to stay away from drugs. This will also help youths to remain physically fit and adopt good habits," said Roshan Sharma, a villager.
Hundreds of people including youth arrive in large numbers to witness the bouts, which is held at the sports stadium in the village along with Ching Fair.
Speaking to ANI, Sarpanch, Om Parkesh said: "This annual wrestling has been our tradition for over a hundred years and along with the 'Ching Mela' we are keeping alive the tradition of our elders. The youth of our village practice every day to take part in this annual wrestling."
The youth, said the Panchayat head, were very keen to participate in the annual event in which a number of wrestlers arrive to display their muscle prowess.
This year among the participants was Jyoti, a girl wrestler from Himachal Pradesh's Nurpur. She encouraged girls to participate in wrestling. She said that every parent should support their girls and encourage them to participate in such sports.
"Earlier only men participated in wrestling matches, today girls are also given chance to participate and display their talents. Girls should be encouraged to take part in wrestling, a sport with is also good for our health and body," said Jyoti.
The annual wrestling match in this village encourages athletes across gender, while striving to keep alive the traditional Indian sport. (ANI)