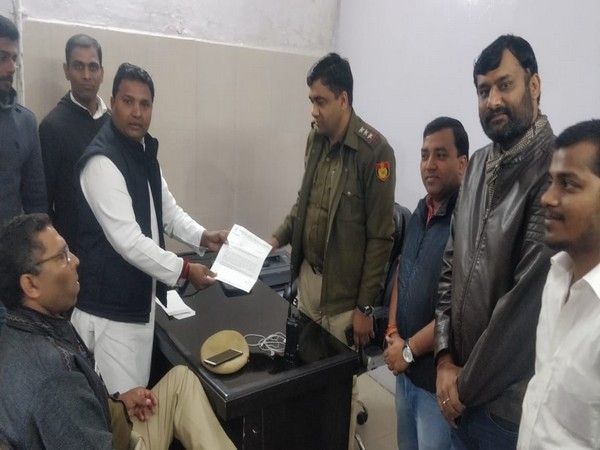 New Delhi [India], Jan 31 (ANI): Alleging that the firing incident near Jamia Millia Islamia (JMI) yesterday has a "direct link" to the "inflammatory speech" by Union Minister Anurag Thakur, the Indian Youth Congress (IYC) has requested the Delhi police to take action against the BJP MP.

"As we all came to know of the shocking incident of a man open firing on people who were peacefully demonstrating against CAA and NRC, leading to serious injury to a student. Now, this incident has a direct link to the inflammatory speech given by BJP MP and Union Minister Anurag Thakur on January 27, 2020, in Delhi," the letter by IYC on Thursday read.
The letter signed by IYC national president, Srinivas BV, further added, "When he appealed the crowd to open fire on those who protest against CAA and NRC and also calling them as 'Desh ke gaddaron ko goli maro saalo ko' this hateful speech triggered the perpetrator's mind who opened fire on students."
Through the letter, addressed to the Deputy Commissioner of Police (DCP) Central, New Delhi, IYC requested to take the matter seriously and take immediate action against Thakur "before this leads to further escalation of such violent incidents and that the government and police force will be responsible for not acting in time."
The IYC members later handed over the letter to the police officials at the Parliament Street police station in New Delhi.
Meanwhile, the Delhi Police Crime Branch will produce the Jamia firing accused before the Juvenile Justice Board later today.
The accused, on Friday, said he has no remorse for what he did and was radicalised by viewing videos on social media, claimed Delhi Police.
Police sources also said that the accused had procured the country-made pistol from his village and left for Delhi in a bus to take revenge for the death of Chandan Gupta. Gupta was killed in Kasganj violence on January 26.
The accused brandished a gun despite heavy police force deployment and fired at the marching students on Thursday.
Delhi police sources said that the accused has denied having any connection or links with any organisation. (ANI)