Japan is treasured partner of Odisha, we will make it everlasting: Odisha Minister 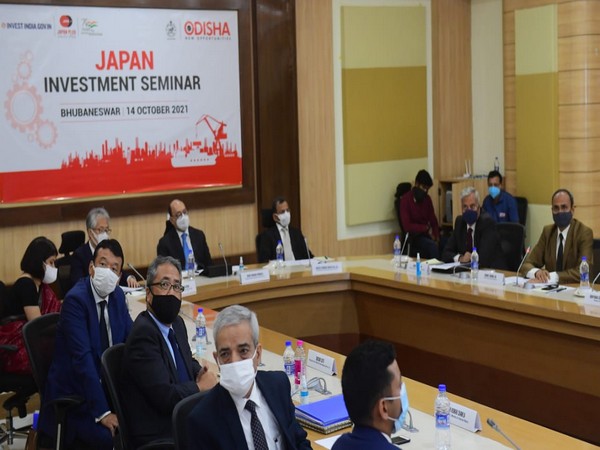 Bhubaneswar (Odisha) [India], October 14 (ANI): In another significant step towards furthering Japan-Odisha industrial partnership, a target-oriented seminar session was held between the industry delegates from Japan and the Government of Odisha under the Chairmanship of Minister Industry, MSME and Energy Captain Dibya Sankar Mishra in Lokseba Bhawan conference hall on Thursday both in digital and physical mode.

The seminar focused on exploring the possibilities of new Japanese investment in Odisha.
Giving the keynote address, Minister Capt. Mishra said, "Japan has been a treasured partner of India and Odisha. Our State under the leadership of Chief Minister Naveen Patnaik is committed to build an everlasting relationship with Japan both in industrial and cultural spheres".
Mishra added, "Many Odia people have made Japan their home. The Japanese people and artists like Masako Ono have become a part of Odishan culture".
Addressing the Seminar, Chief Secretary Suresh Chandra Mahapatra said, "The industrial collaboration with Japan has been very successful in the last years. Japanese investors like Arcelor Mittal, Nippon Steels, TRL Krosaki have made big success strides in Odisha. The State, under the visionary leadership of Chief Minister Naveen Patnaik, is now a preferred destination of investment. The State machinery is very fast in handholding and facilitating the investors".
Mahapatra added, "The officers operating at different levels from the State to the district, tahasil and the blocks are part of Odisha's growth story and, we would ensure all kinds of proactive support to the Japanese investors not only from initiation to the commissioning but also for their continued smooth operation".
Addressing the Seminar, Harsh Vardhan Shringala, Foreign Secretary Government of India said, "The case for Japanese investment in Odisha is well made. The robust infrastructure, strong political will and enabling bureaucracy coupled with the natural resources are great strengths of Odisha".
He added that the Government of India would provide all required support for successful investments in Odisha.
Presenting Odisha as a land of opportunities, Principal Secretary Industry Hemant Kumar Sharma said, Odisha has been a leader State in attracting investments for its natural resources, ease of doing business and facilitating legal framework. He added, "Industry and service sectors are two large sectors contributing around 80% of States' GDP".
Further, Sharma outlined the scopes for Japanese investment in steel, steel downstream, aluminium downstream, chemicals, petrochemicals, seafood processing, electronics and automobile manufacturing.
Sharma also explained the whole process of the approval and commissioning of the industries through the Go-Swift portal and single window system. He said, "The single window system of the State is first of its kind, and, it supports the industries throughout their investment life-cycle".
The Japanese delegation came to Odisha under the leadership of Satoshi Suzuki, Ambassador Extraordinary and Plenipotentiary of Japan to India. Addressing the seminar, Suzuki appreciated the support provided by Odisha Government to the Japanese investors in the last years. He expressed the hope that the recent industrial and developmental surge in the State would be more helpful in the realization of new Japanese investments in the State.
The chairman, managing directors and the chief executives of the industry leaders like Acrcelor Mittal, Nipon Steel, TRL Krosaki, Tata Group, Aditya Birla, Indo-Nissin Foods, Reliance and Mind Tree shared their experience in Odisha with the potential investor of Japan. These industry icons highly appreciated the legal framework within which Odisha Government operates, single-window clearance in true sense of the term, industry enabling bureaucracy, industrial peace, political stability, robust infrastructure, rail, highway, air and port connectivity etc. Around ten potential investors from big industrial houses of Japan participated in the Seminar and interacted with the senior officers of Odisha.
MD IPICOL Bhoopinder Singh Poonia coordinated the entire event. The senior officers from Industry, MSME and other concerned departments participated in the deliberations. (ANI)