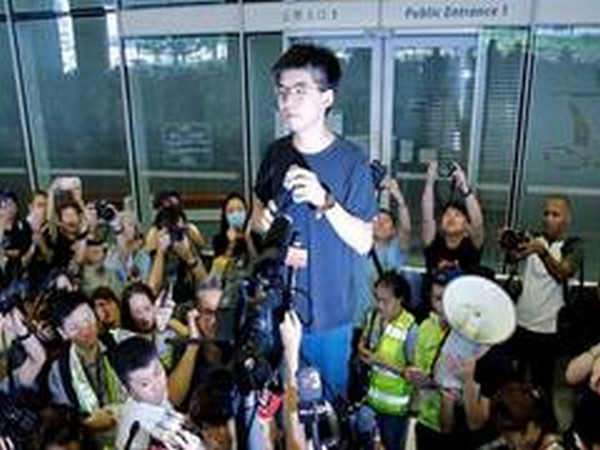 They made the announcement on Facebook, around two hours after China's top legislative body passed a law that is set to criminalise secession, subversion, terrorism and foreign interference in Hong Kong, Hong Kong Press Free reported.
Demosisto was founded in 2016 as a political platform and sought to field candidates for legislative elections. However, its candidates were repeatedly barred from standing for election with authorities citing their stance on "self-determination" for the city.
Wong said that, under the newly-passed national security legislation, it was no longer "nonsense" for pro-democracy figures to worry about their lives and personal safety. He cited concerns over a 10-year "political imprisonment," as well as being extradited to China, saying "no one could be sure [what would happen] tomorrow."
"I hereby declare withdrawing from Demosisto...If my voice will not be heard soon, I hope that the international community will continue to speak up for Hong Kong and step up concrete efforts to defend our last bit of freedom," Wong wrote on twitter.
He said in the face of his "dire destiny," he had to resign from his role as the group's secretary-general and continue advocating for his beliefs individually.
"I believe at this moment, there are countless pairs of eyes in the world caring about Hong Kong, and gazing at my personal situation under the national security legislation. I will continue to defend my home - Hong Kong - until they silence, obliterate me from this piece of land," Wong wrote.
A similar action was undertaken by other pro-democracy groups as well.
Pro-independence group Hong Kong National Front also took to social media to announce that it would disband its local members starting on Tuesday. The group said its overseas divisions in Taipei and the UK would take over the work of the Hong Kong division and continue to promote independence.
Studentlocalism - which also advocates for an independent Hong Kong - said it would do the same, and establish overseas divisions in Taiwan, the US and Australia to handle the organisation's ongoing work.
While details of the security legislation have not been made public, many in Hong Kong fear it will be used to silence dissent.
China says the national security law will target only a small group of troublemakers and people who abide by the legislation have no reason to worry.
However, the law has alarmed foreign governments concerned that Beijing is eroding the high degree of autonomy granted to the city when it was returned to Chinese rule in 1997, which underpins its role as a financial centre. (ANI)