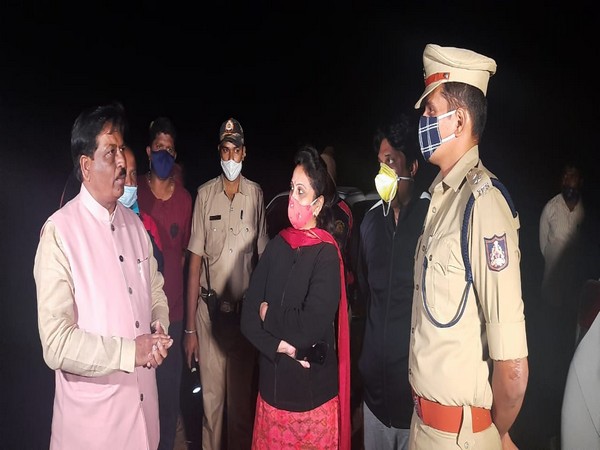 Chikkaballapura (Karnataka) [India], February 24 (ANI): Karnataka Mines and Geology Minister Murugesh Nirani on Tuesday inspected the blast site at Hirenagavalli in Chikkaballapura. The Minister collected information from the officials and instructed them to find out illegal hoarding of explosives in stone quarries and mining areas.

He said that the state government will take all the necessary precautions so that such incidents do not reoccur.
Addressing the reporters after inspecting the blast site, Nirani warned of tough action against the culprits.
"Tough action will be taken against those found using explosives without the government's permission. A license from government is mandatory to use explosives. Criminal cases will be filed against those responsible for such incidents in the future. Vehicles will be subjected to tough inspection at check-posts with the coordination of transport and home departments. Vehicles departing from the state and arriving from other states will be strictly monitored. The government will enact a law, making it mandatory to obtain a licence to use explosives," Nirani said.
Warning the officials over laxity, the minister said such officials will face disciplinary action.
"Government will take action against the officials who fail to take action to prevent such incidents. Vehicles transporting explosives must be inspected thoroughly and officials who show laxity will face disciplinary action. Those responsible for the Chikkaballapur blast will be punished as per the law and there is no question of leniency no matter how powerful and influential the accused are," Nirani said.
Consoling the kin of the deceased, Nirani said the government will provide all possible assistance.
"Karnataka Chief Minister BS Yediyurappa has already ordered the Crime Investigation Department (CID) probe into the blast incident to find out the truth. My heart goes out to the victims and their families. A compensation of Rs 5 lakh will be provided to the kin of the deceased. The injured will be provided the best medical care. State Government will extend all the assistance to the victims and their families," Nirani said.
"The minister, who landed in Bengaluru from New Delhi, headed directly to the blast site. Chikkaballapura DC, Superintendent of Police and officials of Mines and Geology accompanied Murugesh Nirani," read the press release by the state government. (ANI)