Modi flagged off the first batch of pilgrims led by Akal Takhat Jathedar Giani Harpreet Singh to Gurdwara Darbar Sahib through the corridor, which was thrown open days ahead of the 550th birth anniversary of Guru Nanak Dev on November 12.

The prime minister inaugurated the passenger terminal building of the corridor on the Indian side, also known as the Integrated Check Post, where pilgrims will get clearance to travel through the newly-built 4.5 km-long corridor.

India had signed an agreement with the neighbouring nation on October 24 on the modalities for operationalisation of the corridor at 'Zero Point' of the international boundary at Dera Baba Nanak.

Shiromani Gurdwara Parbandhak Committee members and all the 117 MLAs and MPs from Punjab were also part of the 'jatha' (delegation).

Donning a saffron coloured turban (head gear), Modi watched a video on the life and teachings of Guru Nanak Dev. The prime minister was also shown a model of the Kartarpur corridor.

At the time of flagging off the jatha, Modi met Manmohan Singh, who was accompanied by his wife Gursharan Kaur, and had a brief chat with him.

The state-of-the-art passenger terminal building, with a design inspired by 'Khanda' -- a symbol of faith in Sikh community, has been constructed on 15 acres of land.

The fully air-conditioned building, akin to an airport, has over 50 immigration counters for facilitating about 5,000 pilgrims a day.

It has all necessary public amenities such as kiosks, washrooms, child care and first-aid facilities, prayer rooms and snacks counters.

The project was executed by the central government agency Land Ports Authority of India.

On November 22 last year, the Union Cabinet had passed a resolution to celebrate the historic occasion of the 550th birth anniversary of Guru Nanak Dev in a "grand and befitting manner" throughout the country and across the globe.

The Cabinet had also approved the building and development of the Kartarpur Sahib corridor from Dera Baba Nanak to the international boundary to facilitate pilgrims from India to visit Gurdwara Darbar Sahib round the year in a smooth and easy manner.

Notwithstanding their strained ties, India and Pakistan signed an agreement last month, paving the way for the inauguration of the Kartarpur corridor. According to the pact, Pakistan will allow 5,000 Indian pilgrims daily to visit Gurdwara Kartarpur Sahib.

Dedicating the corridor to the nation, Prime Mnister Modi also thanked Pakistan's workers who worked to help build their portion of the corridor.

"I thank Pakistan Prime Minister Imran Khan miaji. He understood India's feelings on the Kartarpur corridor issue, gave respect and, keeping in view those feelings, worked accordingly," he told a gathering at the BSF camp in Shikhaar Masiahan, about eight kilometres from the Dera Baba Nanak gurdwara.

"I also want to thank the workers of Pakistan who worked at a fast pace to help in building the corridor on their side," the prime minister added.

He said it was his fortune that he was dedicating the corridor to the nation.

"I am feeling blessed on this holy land... At this moment I get the same feeling all of you get at the time of doing 'kar seva' (religious service)," the prime minister said.

He also congratulated everybody in the crowd, the country and Sikhs the world over on the occasion.

Modi said he dedicated the Kaumi Seva award given to him by the Shiromani Gurdwara Prabandhak Committee to Guru Nanak Dev.

The opening of the corridor and the Integrated Check Post before the 550th “Prakash Purb” of Guru Nanak Dev has brought "double delight", he said.

"With this corridor, paying obeisance at Gurdwara Darbar Sahib will become easy. I express gratitude to the Punjab government, the SGPC and all the workers who were involved in building this corridor," he said.

Guru Nanak Dev, Modi said, is not the legacy of Sikhs alone but an inspiration for entire humanity, he said. 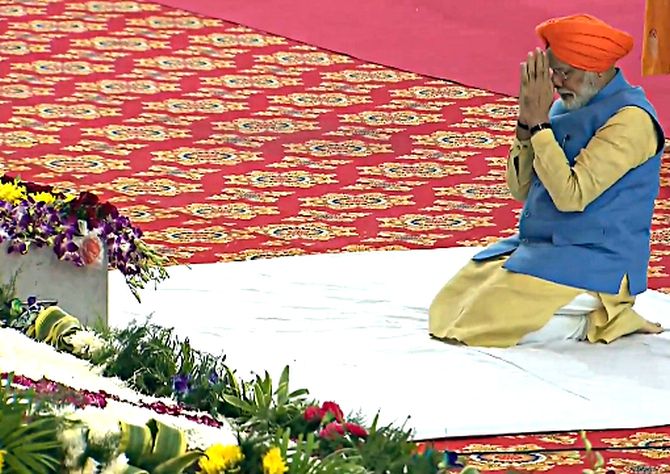 IMAGE: Prime Minister Narendra Modi offers prayers on the occasion of the inauguration of the Kartarpur Sahib corridor, at Dera Baba Nanak in Gurdaspur on November 9, 2019. Photograph: ANI Photo.

"Guru Nanak Dev, besides being a guru, is a thought, the basis of life. Our values, culture, our thoughts, our thinking, our upbringing, our reasoning, our speech, all of these have been honed by pious souls like Guru Nanak," he said.

When Guru Nanak Dev set out on his travels from Sultanpur Lodhi, who knew what change he would usher, he said. Modi said the guru himself had proclaimed that he had set out on the 'yatras' to pull society out of injustice, darkness and inequalities.

Modi also touched the issue of environment and drugs on the occasion.

"We have become irresponsible about the environment," the prime minister said.

Opening our hearts for Sikhs: Imran

Pakistan Prime Minister Imran Khan said the historic opening of the Kartarpur Sahib corridor is a testimony to his country’s commitment to regional peace, as he congratulated the Sikh community on the 550th birth anniversary of Baba Guru Nanak Dev, the founder of Sikhism.

The Kartarpur Sahib corridor linking Dera Baba Sahib in Gurdaspur in India and Gurdwara Kartarpur Sahib in Pakistan was thrown open on Saturday, in a historic people-to-people initiative, sparking a glimmer of hope for improvement in the strained ties between the two countries.

The Gurudwara Kartarpur Sahib is located across the Ravi river in Pakistan and is about four kilometres from the Dera Baba Nanak shrine in Gurdaspur district of Punjab.

In his message on the occasion of Kartarpur Sahib Corridor's opening, Khan said, "We believe that the road to prosperity of region and bright future of our coming generation lies in peace."

"Today we are not only opening the border, but also our hearts for the Sikh community," he said.

Prime minister Khan said the unprecedented gesture of goodwill from his government was a reflection of its deep respect for Baba Guru Nanak Dev and religious sentiments of the Sikh community.

According to the agreement between Pakistan and India, 5,000 pilgrims from India can visit the shrine daily and the number can be increased in future.

The requirement of passport and the USD 20 service fee have been waived for Saturday and for November 12 by Pakistan.

Separate events have been organised on both the sides of the border to launch the much-awaited corridor ahead of Sikhism founder Guru Nanak's 550th birth anniversary on November 12.

The inauguration of the corridor comes in the midst of frayed ties between India and Pakistan following New Delhi's decision in August to withdraw Jammu and Kashmir's special status and bifurcate it into two Union Territories.

Notwithstanding a chill in bilateral ties over Kashmir, India and Pakistan after tough negotiations signed an agreement last month, paving the way for the inauguration of the Kartarpur corridor on November 9.