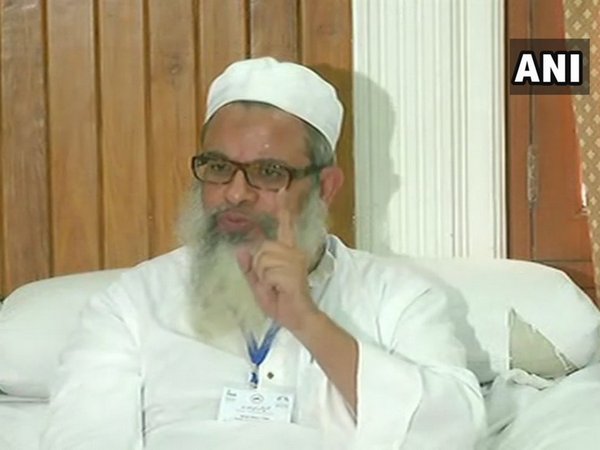 By By Pragya Kaushika
New Delhi [India], Sept 12 (ANI): The General Council of the Jamiat Ulema-i-Hind, on Thursday passed a resolution stating that Kashmir is an integral part of India. The Islamic body has supported National Register of Citizens (NRC) and supported the government's stand on identifying foreigners in the country.

While the Islamic body shied away from extending their support for the abrogation of Article 370, its scholars reiterated their stand to support the nation over issues of national security and integrity.
Speaking to ANI, Maulana Mahmood Madani, general secretary, Jamiat Ulema-i-Hind said, "Pakistan is trying to project on the international forum that India Muslims are against India. We condemn this act of Pakistan. We won't be divided by enemy neighbour. "
Madani said that his organization has maintained that Kashmir is an integral part of India and even passed resolutions in this respect in 1951, 1963 and now in 2019 as well.
The move is significant as the Jamiat Ulema-i-Hind is one of the leading organisations of Islamic scholars in India. The representatives of the organization maintained that it is against the two-nation theory.
"We rejected the two-nation theory even then. This is our country and we won't let anyone play with its integrity ever. We want to warn the enemy of our nation who are within and outside to not play with the nation's integrity," Madani said.
"The Jamiat Ulama-i-Hind stands for unity and integrity of the country. Any separatist movement is not only harmful to India but also for the people of Kashmir," said the resolution passed by the top Islamic body in the country today.
The resolution comes a month after the Narendra Modi government decided to abrogate Article 370 of the Constitution which gave special status to the state of Jammu and Kashmir. The state of Jammu and Kashmir has also been bifurcated into two union territories by the government.
In an attack on Pakistan and its attempts at fuelling separatism in the region, the Jamiat Ulema-i-Hind resolution said, "The inimical forces and the neighbouring country are bent upon destroying Kashmir. The oppressed and beleaguered people of Kashmir are stuck between opposing forces. The enemy has made Kashmir a battlefield using Kashmiris as a shield."
The organisation also called for the protection of rights and unique identity of the locals.
"We are not unmindful of the desire of Kashmiri people and their self-respect and cultural identity, It is our firm belief that the welfare of Kashmir lies in getting integrated with India. Jamiat appeals to government that while respecting the human rights, it must protect life and prosperity of Kashmiri people and use possible constitutional means for bringing back normalcy in the region," it said.
The Jamiat Ulama-i-Hind called on the government to maintain peace in the region. "The situation demands that we launch peaceful initiatives to maintain peace and security in the region especially in view of repercussions of clash of atomic powers," it added.
Madani informed that the organization would be forming Sambhaavna committees at every district and block level to promote harmony.
"People from every religion will be part of that committee. It will ensure that there would be harmony in it," added Madani.
Briefing about the decision of the organization on NRC, Maulana Qari M Usman Mansoorpuri, president, Jamiat Ulema-i- Hind said that they are supporting the decision.
"Who is Indian who is not should be known. Other countries are doing it, we should do it too," he said. (ANI)