Kejriwal getting Pak support because only he can feed biryani to Shaheen Bagh protestors: Adityanath 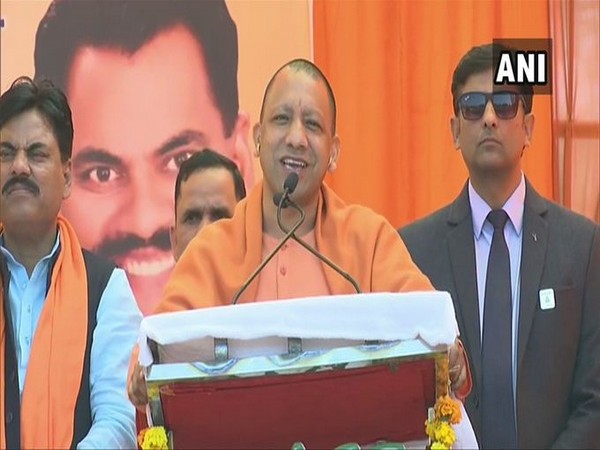 New Delhi [India], Feb 3 (ANI): Addressing a rally in Vikaspuri area here in the run-up to the Delhi Assembly polls on February 8, Uttar Pradesh Chief Minister Yogi Adityanath on Monday said that a Pakistan minister is supporting Delhi Chief Minister Arvind Kejriwal because 'he knows only Kejriwal can feed 'biryani' to protestors in Shaheen Bagh'.

"Why is a Pakistani minister making statements in support of Arvind Kejriwal? Because he knows that only Kejriwal can feed biryani to protestors in Shaheen Bagh," alleged Adityanath.
The UP Chief Minister was referring to Pakistan Minister Fawad Chaudhry's tweet in which he had said, "Under pressure of losing another State election (Delhi), he (Prime Minister Narendra Modi) resorts to ridiculous claims and threats endangering the region."
Chaudhry had posted the tweet in response to PM Modi's comment that India can defeat Pakistan in a war within 7-10 days.
Slamming Chaudhry for his comments, Kejriwal had said, "Prime Minister Modi is my PM as well, will not tolerate interference in our country's internal issues."
"Narendra Modi is India's Prime Minister; he is my Prime Minister as well. Delhi election is our internal issue, and we have zero tolerance for interference by the biggest sponsor of terrorism. No matter how hard Pakistan tries, it cannot attack the unity of our country," Kejriwal had said in a tweet.
People have been protesting against the Citizenship Amendment Act (CAA) in Delhi's Shaheen Bagh area since December last year.
The CAA grants citizenship to Hindus, Sikhs, Jains, Parsis, Buddhists and Christians fleeing religious persecution from Pakistan, Afghanistan, and Bangladesh if they entered India on or before December 31, 2014. (ANI)