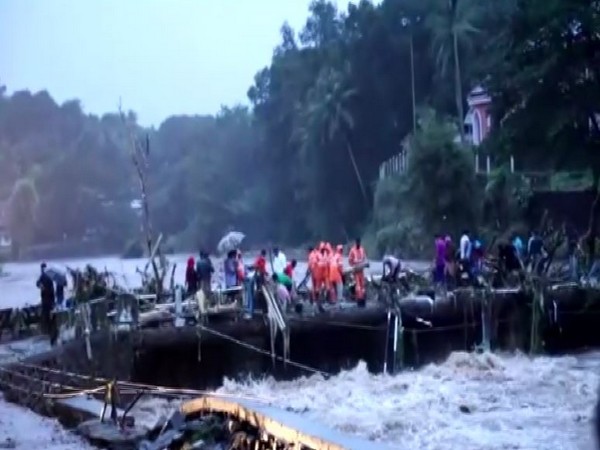 Idukki (Kerala) [India], October 18 (ANI): Following incessant rains that caused flash floods and landslides in Kerala, an orange alert has been issued for the Idukki dam reservoir from 7 am on Monday by the Dam Safety Authority of the state.

Meanwhile, a blue alert has been issued for Idamalayar reservoir in Ernakulam district. A red alert has been issued for Kakki reservoir in the Pathanamthitta district.
The Pathanamthitta district collector informed that shutters of the Kakki dam have been opened.
As rains lashed the state causing landslides and flash floods in several parts, the authorities tightened measures to prevent casualties.
A total of 22 people have died in landslides and flash floods that hit Kokkayar in the Idukki district, said sources in the government.
Earlier, the India Meteorological Department (IMD) predicted heavy rains in Kerala for 3-4 days from October 13 due to the influence of the eastern wind and as part of this, yellow alerts have been issued in 10 districts on October 20 and in six districts on October 21.
The low-pressure area formed in the Arabian Sea near Lakshadweep has weakened but the national weather forecasting agency has predicted that heavy rains will continue till Monday evening.
A total of 11 teams of the National Disaster Relief Teams (NDRF) have been deployed to the state in coordination with the Kerala State Disaster Management Authority (KSDMA).
State ministers K Rajan, Roshy Augustine and VN Vasavan participated in a review meeting to assess the situation arising due to heavy rains in the state, at Mundakkayam in Kottayam this morning. (ANI)