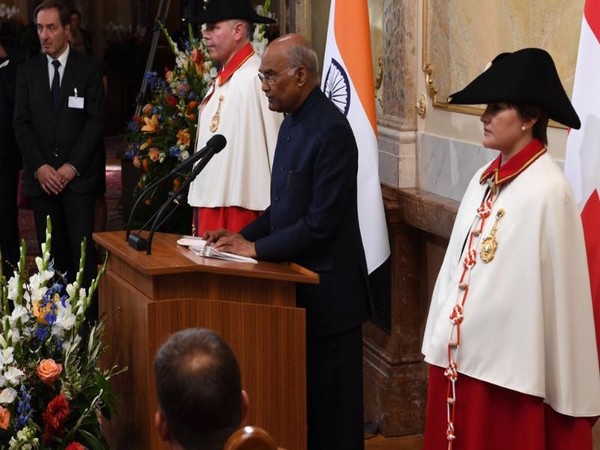 Bern [Switzerland], Sept 13 (ANI): Underlining that India has been a victim of state-sponsored terrorism for decades, President Ram Nath Kovind on Friday appealed for Switzerland's support to strengthen global efforts against the menace.

Kovind was addressing the Federal Council of Switzerland, the highest executive authority of the country. President of the Swiss Federation Ueli Maurer also spoke on the occasion.
"The scourge of terrorism is among the gravest challenges that the world faces today. India has been a victim of state-sponsored terrorism for decades and it seeks Switzerland's support to enhance global efforts to defeat and destroy all manifestations of terrorism," Kovind said.
He told the gathering that the strengths India and Switzerland made them "natural partners".
On India's aspirations to become a USD 5-trillion economy by 2025, the President sought Switzerland's cooperation for India's growth and prosperity.
"Our youth has the drive, energy and confidence to script the machine-intelligence age and to draw the contours of the 4th Industrial Revolution. We are skilling and empowering them to convert our demographic profile into a demographic dividend. We count on Switzerland's cooperation to make them drivers of our growth and prosperity," he said.
Kovind thanked Switzerland's continued support for India's membership of the Nuclear Suppliers Group and also emphasised on the need for the two countries to strengthen their joint efforts in the multilateral arena.
He said India is committed to working with Switzerland to fight climate change and added that India looks forward to the country joining the International Solar Alliance.
The President arrived in Switzerland on Thursday after concluding his bilateral engagements in Iceland. He is scheduled to visit Slovenia. (ANI)