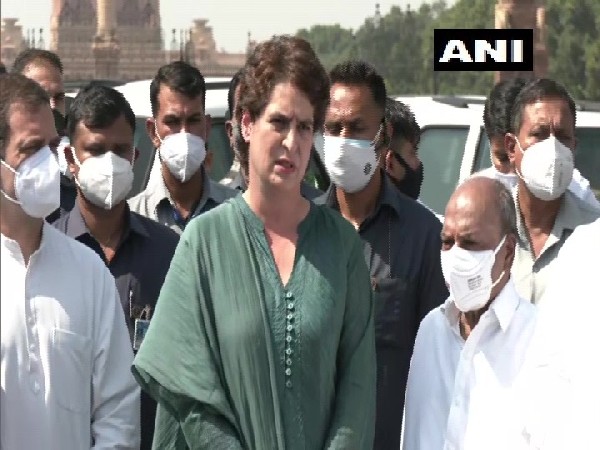 "President has given us the assurance that he will discuss the matter with the government today itself," she told reporters here today.
She reiterated the demand of the party for an investigation under the sitting judges of the Supreme Court into the Lakhimpur Kheri violence that took place on October 3.
Recently, a Congress delegation including Priyanka had met the kin of the victims in the Lakhimpur Kheri district of Uttar Pradesh.
Speaking on her meeting, Priyanka said that the kin of the victims want justice. "For them, the meaning of justice is that an unbiased investigation takes place under sitting judges of the Supreme Court. They have demanded that the Union Minister of State for Home Affairs (Ajay Mishra Teni) be sacked. They believe that an unbiased investigation cannot take place till then," she stated.
Priyanka further stressed that the hope for justice should never end.
"It is the responsibility of the government to listen to the voice of the country and the public. It is not my demand or the demand of Congress or our workers. It is the demand of the public. I reiterate, it is the demand of the public of Uttar Pradesh and the families of those martyred," she said.
The Congress delegation that met the President today was led by Rahul Gandhi and included Priyanka Gandhi Vadra, Mallikarjun Kharge, KC Venugopal, AK Antony, Ghulam Nabi Azad and Adhir Ranjan Chowdhury.
In a memorandum submitted to the President, the Congress has demanded dismissing of MoS Teni and an independent judicial investigation by a Commission comprising of two sitting judges of the Supreme Court of India or the High Court.
A total of eight people including four farmers died in the Lakhimpur Kheri violence. Sanyukta Kisan Morcha (SKM), an umbrella body of farmer unions, had alleged MoS Teni's son Ashish Mishra shot a farmer while the others were run over by the vehicles of his convey.
However, MoS Teni refuted the allegations saying that his son was not present at the incident. Ashish reiterated the same and refuted SKM's allegations.
Three people, including Ashish Mishra, have been arrested in the case so far. (ANI)