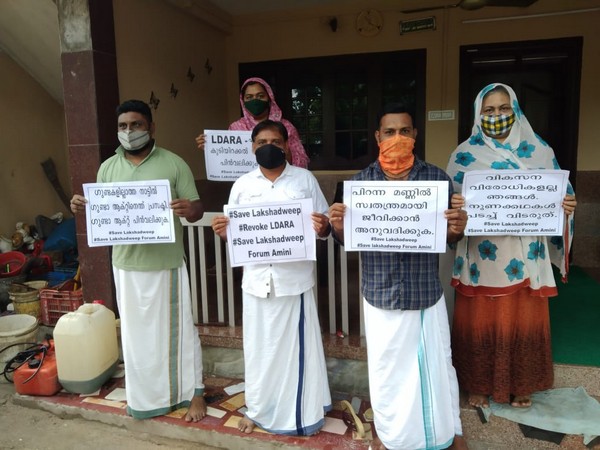 Lakshadweep [India], June 7 (ANI): Lakshadweep residents on Monday held placards during a 12-hour hunger strike against the alleged anti-people policies brought in by the Lakshadweep administration.

Protestors including women and children held placards outside their homes demanding the alleged draconian laws to be revoked. The "Save Lakshadweep Forum" is in forefront of the protest.
People of the island are protesting against the new reforms being introduced by administrator Praful Khoda Patel, which they allege are against the interest of the people of islands.
People are protesting against the draft legislations like Lakshadweep Prevention of Anti-Social Activities Regulation (Goonda Act), Lakshadweep Animal Preservation Regulation and Lakshadweep Panchayat Regulation, 2021 among others.
Adi, a participant in the protest said, "We want to safeguard the interests in these islands. The administration is ignoring our demands. Thus, we have taken a part in these protests."
Another protestor said, "We want to ensure peace in Lakshadweep. Thus, we will protest peacefully outside our residences by adhering to Covid protocols."
On June 1, a delegation of the Bharatiya Janata Party (BJP) from Lakshadweep met party chief JP Nadda and Union Home Minister Amit Shah on Monday and discussed the situation in the union territory and the concerns of the locals. Amit Shah assured the BJP delegation that all concerns of the locals will be addressed, BJP's in-charge for Lakshadweep, AP Abdullakutty had said.
Over the last week, several leaders have called for a new administrator in the Lakshadweep islands, including Lakshadweep MP and Nationalist Congress Party (NCP) leader Mohammed Faizal. Faizal accused Administrator Praful Khoda Patel of implementing anti-people rules and regulations and urged Prime Minister Narendra Modi and Union Home Minister Amit Shah to 'listen to the outcry of the local people and send in a new Administrator'.
Youth Congress Kerala President and Congress MLA Shafi Parambil had even written to the Chief Minister of Kerala, Opposition Leader and the Speaker of the Kerala Legislative Assembly requesting to pass a resolution "as a solidarity of the Malayalee community to the struggle of the people of Lakshadweep" against the new authoritarian decisions taken by the current Administrator of Lakshadweep Praful Patel.
Congress had written to President Ram Nath Kovind alleging that the current Administrator of Lakshadweep Praful Patel had taken "authoritarian measures" and demanded his recall.
In a letter written to the President, Congress general secretary KC Venugopal said that there is apprehension among the people of Lakshadweep and resultant widespread protests "owing to the authoritarian measures taken by the current Administrator Praful Patel".
Patel, who was appointed as the Administrator of Lakshadweep in December 2020 is facing opposition over policies introduced by him from the people of the union territory and politicians, both from within Lakshadweep and neighbouring state Kerala.
The Collector had defended the laws imposed by Administrator Praful Khoda Patel earlier as well and said people with vested interests are propagating misinformation about him. (ANI)