Land restoration is condition toward peace and prosperity: COP14 ends 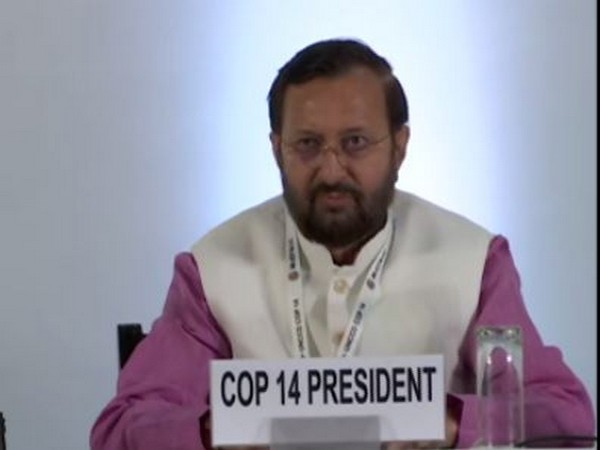 By Joymala Bagchi
Greater Noida (Uttar Pradesh) [India], Sept 13 (ANI): Union Minister Prakash Javadekar on Friday said that land is an important asset and globally work should be done to restore overall change.
Javadekar made the remarks while addressing the closing ceremony of COP14 to United Nations Convention to Combat Desertification (UNCCD) here.

India has set a target of restoring 26 million hectares of degraded land by 2030.
Javadekar, who is also the president of COP14 said, "India is committed to ensuring restoration of more and more degraded land. It is already working on in climate and biodiversity."
In addition, the minister added, "Desertification and biodiversity have to work in synergy, good ideas have come."
UNCCD Executive Secretary Ibrahim Thiaw said, "We had a flawless COP. It was all well organized. We had days dedicated to gender, drought and land issue. Delhi Declaration is a powerful document."
Next on cards is the UN Climate Action Summit at New York which aims to showcase a leap in collective national political ambition and demonstrate massive movements in the real economy in support of the agenda.
UNCCD has 196 countries and 5000 participants. United Nations observed earlier that land degradation is costing a scale as high as 1.3 billion dollars every day. (ANI)