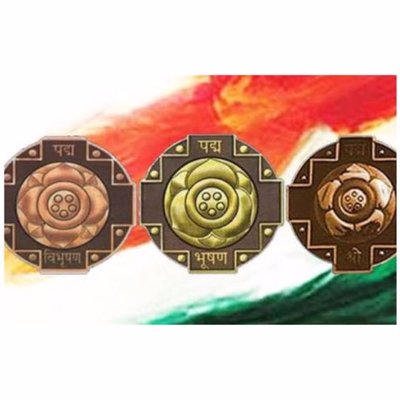 New Delhi [India], September 15 (ANI): Ministry of Home Affairs has informed that the last date for filing nominations for Padma Awards is on Wednesday.

As per the official communique by the ministry on Tuesday, it read, "Online nominations/ recommendations for the Padma Awards (Padma Vibhushan, Padma Bhushan and Padma Shri) to be announced on the occasion of Republic Day, 2022 are on. The last date for nominations for Padma Awards is September 15, 2021."
The nominations/ recommendations for Padma Awards will be received online only on the official Padma Awards portal.
The ministry informed that the government is committed to transform Padma Awards into "People's Padma".
All citizens are therefore requested to identify talented persons whose excellence and achievements really deserve to be recognized from amongst women, SC/STs, divyang persons and who are doing selfless service to the society and make nominations/recommendations.
The nominations/recommendations should contain all relevant details specified in the format available on the above said Padma Portal, including a citation in narrative form (maximum 800 words), clearly bringing out the distinguished and exceptional achievements/service of the person recommended in her/his respective field/discipline.
Further details in this regard are also available under the heading 'Awards and Medals' on the website of the Ministry of Home Affairs. The statutes and rules relating to these awards are available on the website.
The Padma Awards are one of the highest civilian honours of India announced annually on the eve of Republic Day. The Awards are given in three categories: Padma Vibhushan (for exceptional and distinguished service), Padma Bhushan (distinguished service of higher order) and Padma Shri (distinguished service). The award seeks to recognize achievements in all fields of activities or disciplines where an element of public service is involved.
The Padma Awards are conferred on the recommendations made by the Padma Awards Committee, which is constituted by the Prime Minister every year. The nomination process is open to the public. Even self-nomination can be made. (ANI)