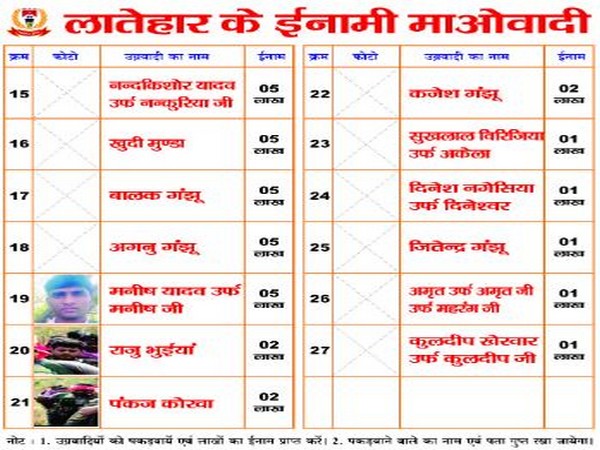 Latehar (Jharkhand) [India], Feb 3 (ANI): Police have released posters of 27 wanted Naxals active in Latehar and surrounding areas. All of them are carrying rewards ranging from Rs 1 lakh to 25 lakh.

Police have urged the locals to help them nab the Naxals.
Also, a 14-point Dos and Don'ts list has been issued to locals appealing not to help the Naxals, not to send their children with Naxal leaders, etc. It has also been stated that if the Naxals force them to do such things, police should be informed immediately.
The list further advises against giving mobile phones to anyone and also to disallow Naxals to lay landmines.
Police are also circulating copies of surrender and rehabilitation policies for Naxals so that it could reach to them. Police believe that most of the active Naxals either have no information or have been misinformed about the surrender policy. (ANI)