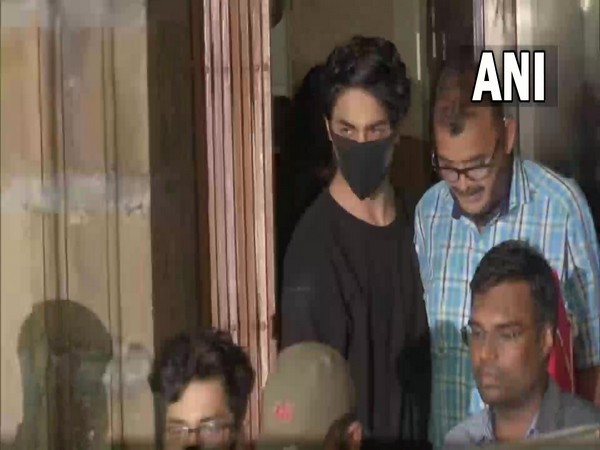 Mumbai (Maharashtra) [India], October 13 (ANI): A Mumbai-based lawyer has filed a written complaint before the Mumbai Police Commissioner Hemant Nagrale against five persons for their suspicious role in the Mumbai cruise party case.

The complaint filed by Advocate Kanishk Jayant alleged criminal conspiracy by the five persons - KP Gosavi, Manish Bhanushali, Amir Furniturewala, Prateek Gaba and Rushab Sachdeva- and requested the Police Commissioner Nagrale to file FIR for extortion and their suspicious role in Cordelia Cruise Drug Case.
The complaint had been filed before the Mumbai police commissioner and at Yellow Gate police station.
The complainant asked "who has authorized Gosavi and Bhanushali to take physical custody of any citizen of India and manhandle an unsuspecting citizen on behalf of the Narcotic Control Bureau?"
"Has Sameer Wankhede authorized KP Gosavi and Manish Bhanushali to take physical custody of Aryan Shah Rukh Khan and Arbaaz Merchant," asked the complaint.
"What prompted the NCB to release Rishabh Sachdeva, Pratik Gaba and Amir Furniturewala?" added the complaint.
"Who allowed Rishabh Sachdeva's father and uncle as categorically narrated by Nawab Malik, a senior cabinet minister of Maharashtra Government in his various press briefings?" the complainant asked.
The evidence submitted by Nawab Malik in his press briefings has all the ingredients of a serious offence that is cognizable and non-bailable.
The complaint stated that the object of filing a complaint against these five persons is to unearth the truth and to ensure that no unauthorized person can take physical custody of a fellow citizen in an unlawful manner.
Earlier in October, Bhartiya Janta Party worker Manish Bhanushali accepted that he was the one who was seen escorting Arbaz Merchant, out of the International Cruise Terminal, as claimed by Maharashtra Cabinet Minister and the Nationalist Congress Party (NCP) leader Nawab Malik, but clarified that he holds no official position in the party.
Citing a video in which those detained from the Mumbai cruise were seen being taken to the NCB office, Mallik alleged that "the person taking him (Aryan Khan) to the office is a BJP leader Manish Bhanushali."
Malik had alleged that the NCB raid onboard a Mumbai cruise was "forgery", and that BJP had misused the central agency to frame Aryan Khan.
He had also alleged that "not even a single gram of drug was seized on the cruise or at the terminal."
Eight persons including Aryan Khan, Arbaz Seth Merchant, Munmun Dhamecha, Vikrant Chhoker, Ismeet Singh, Nupur Sarika, Gomit Chopra and Mohak Jaswal were produced before Mumbai's Esplanade Court on Monday which remanded them to Narcotics Control Bureau (NCB) custody till October 7.
An NCB team busted an alleged drugs party on the Cordelia Cruise ship which was on its way to Goa at mid-sea on Saturday night. (ANI)