Leading by example, Narendra Modi puts out video of plogging to spread message of cleanliness 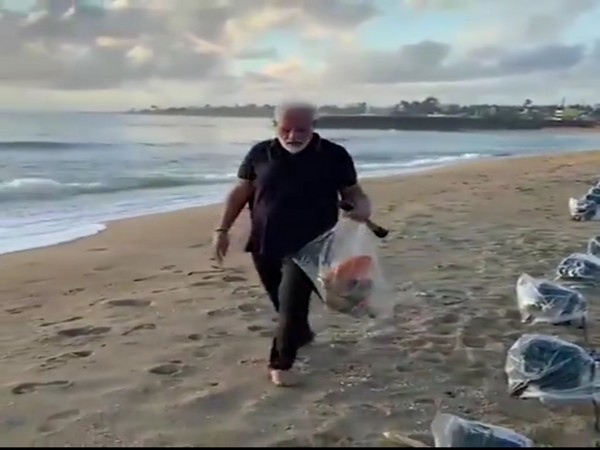 Mamallapuram (Tamil Nadu) [India], Oct 12 (ANI): Ahead of his second round of informal summit with Chinese President Xi Jinping, Prime Minister Narendra Modi took to plogging at a beach here on Saturday morning and called on people to "ensure our public places are clean and tidy."

The exercise lasted over 30 minutes.
"Plogging at a beach in Mamallapuram this morning. It lasted for over 30 minutes. Also handed over my 'collection' to Jeyaraj, who is a part of the hotel staff. Let us ensure our public places are clean and tidy! Let us also ensure we remain fit and healthy," Modi's tweeted along with a 3-minute video of him cleaning up the beach.
Plogging is an exercise that combines jogging with picking up litter. Prime Minister Modi had earlier too spoken in favour of the exercise which not only keeps the body healthy but helps the environment.
Earlier today, the Prime Minister also released several pictures of him on a morning walk at the beach.
"Refreshing walk and exercises in Mamallapuram, along the scenic coast," Modi tweeted.
During his monthly 'Mann Ki Baat' radio address on September 29, the prime minister had said that the government will be organising several two-km-long runs to promote plogging across the country starting October 2.
Union Sports Ministry will be organising 'Fit India Plogging Run' for two kilometres from October 2, Modi had said during his monthly radio address.
"We would be jogging for two kilometres while collecting litter in a bag. With this, we will not only be taking care of our health but also that of the mother earth," he had said.
Modi is in Mamallapuram for informal talks with Chinese President Xi Jinping who is on a two-day visit to India.
Both the leaders are holding their second round of their informal summit today, which will be followed by delegation-level talks.
After the talks, Modi will host a lunch in the honour of the visiting dignitary. Following this, Xi will then proceed to Chennai where he will depart for a two-day state visit to Nepal. (ANI)