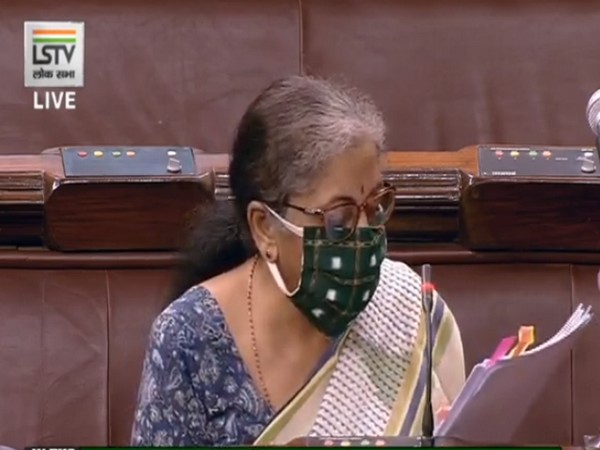 New Delhi [India], September 16 (ANI): The Lok Sabha on Wednesday took up for consideration a bill to address the potential disruptions in the financial system by providing for the Reserve Bank of India to prepare a scheme for reconstruction or amalgamation of the banking company without the necessity of first making an order of moratorium.

Moving the Banking Regulation (Amendment) Bill 2020 for passage of the House, Finance Minister Nirmala Sitharaman said the legislation had been brought to protect the interest of depositors.
The bill will replace an ordinance brought earlier by the government.
"For the last two years, depositors of cooperative banks and small banks are facing problems. We are trying to bring this amendment in order to protect the depositors. Because these banks have fallen into hard days requiring therefore the regulator to bring a moratorium and to solve the problem seems to consume all the time. During the budget session in March, we introduced this bill in order to have the amendments brought in so that depositors' interest will be taken care of. But unfortunately, during the budget session, we could not have this bill passed," Sitharaman said.
She said the government had to go for an ordinance because the financial health of many of the cooperative societies, which are also performing as banks, "was becoming very delicate".
"The financial state of affairs of 277 urban cooperative banks is weak and they are reporting loss. 105 cooperative banks are unable to meet the minimum regulatory capital requirement. 47 banks have net worth is negative. 328 urban cooperative banks have more than 15 per cent gross NPA ratio," she said.
The minister said that in March 2020, the stress in cooperative banks increased due to pandemic and gross ratios of urban cooperative banks increased from 7.7 per cent in March 2019 to over 10 per cent in March 2020. "Therefore, it was felt that the ordinance should be brought in the interest of depositors."
She said the bill will not apply to a primary agricultural credit society or a co-operative society whose primary object and principal business is providing of long term finance for agricultural development if such society does not use as part of its name, or in connection with its business, the words "bank", "banker" or "banking" and does not act as drawee of cheques.
The amendments entail making provisions applicable on cooperative banks which apply on commercial banks so that the former is equally subjected to better governance and sound banking regulations through the RBI.
The minister said "amendments to section 45 will enable the RBI to make a scheme of reconstruction and amalgamation, for example, the way in which Yes Bank reconstruction happened to protect the interest of depositors".
Participating in the debate, Congress leader Manish Tewari opposed the manner in which the government had brought an ordinance. (ANI)