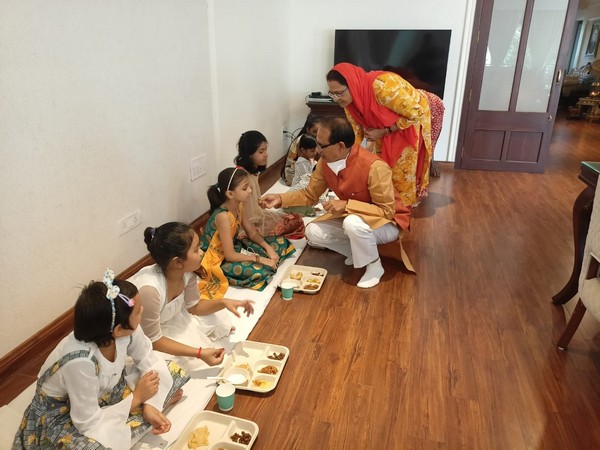 Chouhan was accompanied by his family members.
Speaking to ANI, he said, "In our culture, we worship women. We see goddess in our daughters, sisters and mothers. All of these girls sitting here are goddesses for us. In view of COVID-19, Kanya Pujan was performed here following protocols."
"It is my request to people to perform Kanya Pujan not only on one day but respect them, provide them with safety and education by considering them as goddesses. Only then will Kanya Pujan be meaningful," he added.
Uttar Pradesh Chief Minister Yogi Adityanath also performed 'Kanya Pujan' today.
Congress General Secretary Priyanka Gandhi Vadra also performed the ritual on Wednesday at her father Rajiv Gandhi's foster sister's house.
The celebrations of Sharad (autumn) Navratri involve worshipping Goddess Durga in her nine forms. Shardiya Navratri begins from the first date of Shukla Paksha of Ashwin month, in which the divine forms of Maa Durga are worshipped for nine days.
However, this year Navratri will last only for eight days, as it started on October 7 and ends on October 14.
The 10th day of Shardiya Navratri is celebrated as Dussehra or Vijay Dashami. It is celebrated with great joy and fervour across India by burning the effigies of Ravan in open fields to symbolise the victory of 'good' over 'evil'. (ANI)