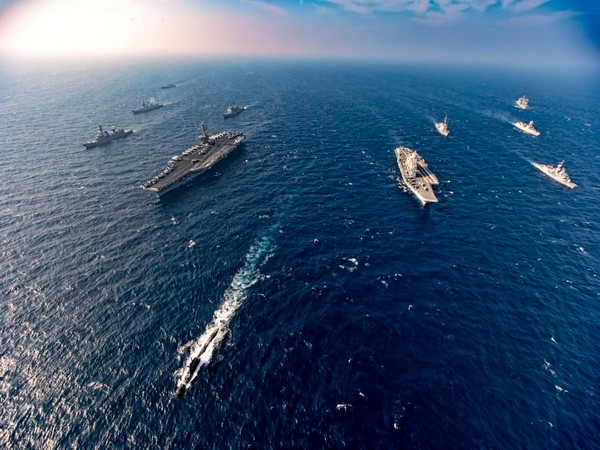 New Delhi [India], November 21 (ANI): Seen as the coming together of four navies against growing hegemoniatic tendencies of China in oceans, a senior commander of the Indian Navy on Saturday said the Malabar-2020 wargames have shown an "extraordinary degree of interoperability" among the four participating forces.

24th edition of the Malabar series of multilateral naval exercises concluded in the Arabian Sea in two phases yesterday with navies of India, America, Japan and Australia taking part in it.
Elaborating the unique features of the wargames, Rear Admiral Krishna Swaminathan, Flag Officer Commanding Western Fleet said, "Malabar 2020 was the 24th edition of the Malabar series of the multilateral naval exercises that the Indian Navy participated in."
He further said, "Although there were many unique aspects of our this particular edition three stood out as being extraordinary. First, it was pronounced for the first time that the exercises was conducted in two phases. The first phase in the Bay of Bengal and the second in the Arabian Sea. Thereby, locating the exercise in both seaports in the Indian peninsula for the first time. Second, it saw the participation of all four possible member navies -- the US Navy, the Japanese maritime self defence force, the Royal Australian Navy and the Indian Navy. Thereby, making the quorum complete for the first time after a long gap. Third, it is on the extraordinary degree of what we call intra-operability among forces of the various nations."
"Exercise #Malabar has been a resounding success. I thank the Indian Navy for their warm hospitality & for their planning, leadership, & execution of the Exercise Malabar," said Antony Pisani, Commanding Officer, HMAS Ballarat of Royal Australian Navy, in a tweet.
Calling the Malabar exercise a success, Rear Admiral James A Kirk, Commander CSG-11 (Nimitz group), in his video message said that that the US, India, Japan and Australian naval forces have proved "the ability to operate together across a broad range of missions"
"Malabar 2020 has been a success. US and Indian naval forces alongside Japanese and Australian partners has proved the ability to operate together across a broad range of missions. Our carriers and their embarked arriearing have executed missions together. US and Indian maritime patrol aircraft have integrated with our ships and aircraft effectively demonstrating our ability to hunt submarines and execute live fire. During this 24th Malabar exercise our navies have achieved an impressive level of inoperability. As fellow democracies we share values," he said.
Meanwhile, the Indian Navy tweeted, "Seamless coordination & swift execution of complex exercises further enhanced synergy & mutual understanding amongst the 4 navies in undertaking joint #MaritimeSecurity Ops & will go a long way in further strengthening their already close #strategic partnership," the Indian Navy said in a tweet. (ANI)