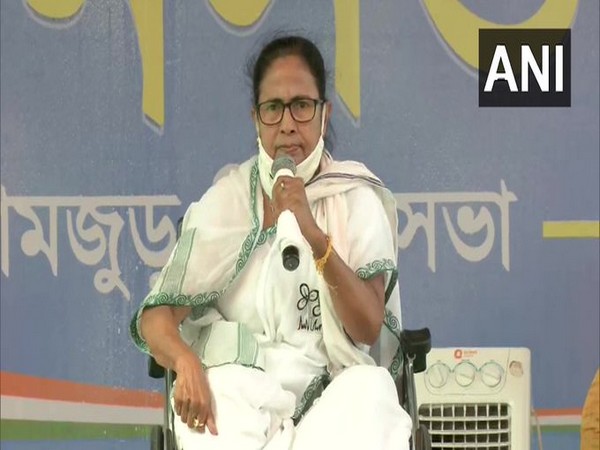 Howrah (West Bengal) [India], April 8 (ANI): Challenging the notice issued by the Election Commission of India (ECI), West Bengal Chief Minister Mamata Banerjee on Thursday said even if she was served 10 of such notices, she would keep urging voters to vote unitedly against the Bharatiya Janata Party (BJP).

Speaking at a public rally in Domjur, Banerjee said: "Even if 10 show cause notices are issued against me, my answer will remain the same. I am telling everyone to vote unitedly, there will no division. Hindus, Muslims, Sikhs and Christians, do not give a single vote to them.
"How many complaints have been filed against (Prime Minister) Narendra Modi? He does Hindu-Muslim every day, how many complaints have been filed against him? How many complaints have been registered against those people who referred to Nandigram's Muslims as Pakistanis? Aren't they ashamed? They cannot do anything against me. I am with Hindus, Muslims, Sikhs, Christians as well as tribals," she added.
Banerjee also lashed out at the BJP for raising fuel prices in the country and accused the party of destroying the country and propagating lies against her and Trinamool Congress (TMC) through national channels.
"They have over one lakh thugs in West Bengal to convert it into Gujarat. We will not let our state be turned into Gujarat," she remarked, adding that the rival party has bought several political leaders with money.
Hitting out at ex-TMC minister Rajib Banerjee, who is contesting from the Domjur constituency for BJP, Mamata Banerjee said: "I apologise to the people of Domjur for allowing Gaddar Mir Zafar (Rajib Banerjee) to file nomination in the last election from this constituency. That traitor stole money. When he was Irrigation Minister I had received a complaint so I removed him from that post and made him Forest Minister, he asked me for an engineering department, so that he could take more commission."
She further called on the rebel minister to reveal details about his properties from Kolkata to Dubai and then ask for votes.
The Chief Minister also chastised the BJP for not coming to West Bengal during the COVID-19 pandemic, cyclone Amphan and floods, but for turning up in huge numbers before the assembly elections.
"Bengal will never be yours, this is Rabindra-Nazrul's Bengal, this is Netaji Subhas Chandra Bose's Bengal, this is Raja Ram Mohan Roy's Bengal, this is Ambedkar's Bengal. BJP, you will never get this Bengal," she proclaimed.
Ahead of the fourth phase of the West Bengal assembly elections, both sides have intensified their campaigning with senior BJP leaders such as Narendra Modi, JP Nadda and Yogi Adityanath entering the fray.
Yesterday, the ECI had issued a notice to Mamata Banerjee over her remarks on April 3, where she appealed to the Muslim voters to not let their vote be split among different political parties contesting in the ongoing assembly elections.
The Commission has asked the Chief Minister to explain her stand within 48 hours after receiving the notice, failing which it shall "take a decision without further reference to you".
The fourth phase of the polls will witness 373 candidates contesting for 44 constituencies in five districts - Cooch Behar, Alipurduar, South 24 Parganas, Howrah and Hooghly.
Former TMC minister Rajib Banerjee will face TMC's Kalyanendu Ghosh in the Domjur constituency.
The first three phases of the eight-phased elections have taken place on March 27, April 1 and April 6. The counting of the votes will take place on May 2. (ANI)