Man gets kicked out of flight for wearing a gas mask 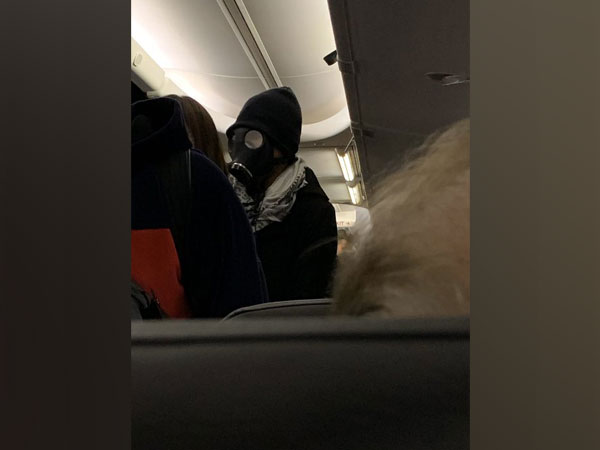 Washington D.C. [USA], Feb 2 (ANI): In an amusing incident, a passenger was spotted in an American Airlines flight wearing a full-face gas mask.

According to Fox News, the Dallas to Huston flight had to be delayed for an hour because the man refused to remove the contraption which led to panic among the passengers.
The man, whose identity is still unknown was subsequently escorted off the plane.
A Twitter user Joseph D S shared a picture on the curious gentleman donning the black-colored gas mask. He captioned the tweet that read, "Just FYI flight 2212 to Houston was delayed an hour because you let this guy on the plane wearing a gas mask. This then panicked people on the plane and we had to wait for him to be escorted off."
Strangely enough, a good number of people turned up in the Twitter comment section to defend the man, who according to them was just practising caution to protect himself from possible infection.
"I Don't Blame This Man For Protecting Himself," commented one user.
The other person wrote: "Jesus Christ he's juts wearing it because he doesn't wanna get the virus."
Another person said "I always travel wearing mask and yes it does make people nervous and no I don't give a toss. People make me sick! Coughing and sneezing not covering their contaminated mouths!"
Though the keenly observant Joseph later pointed out that the mask didn't have a filter attached to it so it was practically useless.
Fox News quoted KTRK which was told by Joseph that: "What we heard from the lady sitting next to him as he said he wanted to make a statement. I don't know what the statement was. I'm not sure what his goals were."
The move, as it turned out eventually, was just an attempt to create some shock value, reported Fox News.
The outlet was informed by the spokesperson of the airlines that the man was put on the next flight to Huston in which he travelled with the mask off of his face. (ANI)