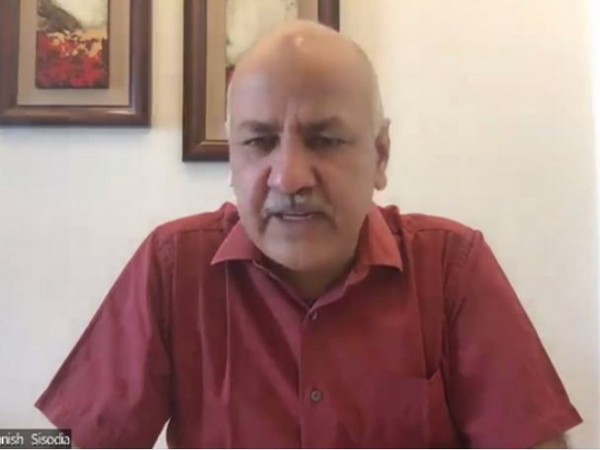 New Delhi [India], September 16 (ANI): Colleges under the University of Delhi are not paying salaries to their staff including teachers despite no money deficit, Delhi Education Minister Manish Sisodia said on Wednesday, alleging that some colleges were spending "money in donations worth lakhs" rather than compensating their teachers.

While addressing a virtual conference today, the minister further alleged that colleges are "involved in embezzlement" while the Delhi government has increased grants for them in the last five years. Based on a fixed pattern, the Delhi government "grants funds to 12 colleges of Delhi University (DU) to fulfill the deficit between the expenditure and revenue" of these colleges from all sources.
"It has come to our notice that colleges receiving grants from the Delhi government are not giving salaries to their staff including teachers. It is being alleged that these colleges do not have funds and they are not able to pay to teachers. As per the data I have studied, over the years, grants for these colleges have been increased. We have given a grant in such a big amount that the salary grant of these colleges has almost doubled in the last five years," Sisodia said.
He said that in the last three years, these colleges and especially University administration did not constitute governing bodies. "It is still pending. They are delaying the process of constituting the governing bodies."
"Several teachers of these colleges met me and apprise me that the funds are utilised for other purposes instead of giving salaries to them. Hence we started special Comptroller and Auditor General of India (CAG) empanelled audit of these colleges," he added.
Sisodia gave details of the audit of these colleges after receiving the initial observation report from the auditors on Tuesday.
"Audit of six colleges have started in the first week of September. On Tuesday, we received an initial observation report from the auditors. In the report, it is found that these colleges have illegally deposited crores of rupees in fixed deposits. They are not giving salaries to teachers and staff," he said.
He alleged that both University administration and college administrations are "playing politics".
"They are charging hefty amounts from students and used the money on their own will. It is a big conspiracy. Initially, these colleges have helped officials in the audit process but later they refused to co-operate with them. They are not giving papers to auditors," he said.
As per the initial observation report of the CAG empanelled audit, Keshav Mahavidyalaya has Rs 10,52,88,590 in its account.
"How they are not able to pay the salaries of their teachers? Where are they going to use it? We have given a fund of Rs 10.92 crore in 2014-15 and the next year we gave 12 crores. In 2016-17, we gave 12.77 crores and the next year we gave 19.70 crores, and in 2019-20 we gave 27.9 crores to them. It is just salary grants. We have increased grants and you have money in your account, how can you do this? It is a crime," he said.
While giving details about Bhagini Nivedita College, Sisodia said that the college has Rs 2.5 crore in their account at the closing of the 2019-20 session.
"We granted Rs 8.5 crore in 2014-15, 11 crore in 2015-16, 2016-17 and 2017-18 and 16 crore in 2018-19. We have given them Rs 18 crore in 2019-20. We have increased their grants and they have money in their account. Where are they spending the money?" he asked.
Shaheed Sukhdev College of Business Studies did not show their account details to our auditors, Sisodia said.
"However, as per the paper shown by them. In 2018-19 they have Rs 3.5 crore and they have FD of Rs 10.45 crore. They have Rs 14 crore with them. In 2014, we have given them Rs 6.86 crore in 2014-15, Rs 7.5 crore in 2015-16, Rs 8.5 crore in 2016-17, Rs 8.75 crore in 2017-18, Rs 11.75 crore in 2018-19, and in 2019-20 we have given them Rs 13 crore. We have increased their salaries grant and almost doubled it," he said.
Delhi Education Minister alleged that colleges are playing with the lives of the people.
"The DU administration is working on behalf of BJP and wants to defame the Delhi government. They are not co-operating with auditors. They are collecting money from students and saying that they do not have money to give salaries. I appeal to DU administration to act against all who have the bad intention and causing damage to teachers' lives," he said.
"We will take action against all those who will be found guilty. You have to audit your balance sheets. I appeal to Delhi University Teachers' Association (DUTA) to raise the issue and force colleges to put audit reports to empanelled CAG auditors," he added.
Sisodia said that currently, he does not have data of grants given by the Delhi government to the colleges.
"I do not have data of grants of 2020-21. In the audit, we have found that the colleges have money in their account. They do not have a deficit," he said while responding to a question during the press conference.
Hundreds of college teachers and other staff members working at Delhi University are reportedly unpaid for nearly five months.
The 12 colleges which receive funds from the Delhi government are -- Shaheed Sukhdev College of Business Studies, Bhim Rao Ambedkar College, Mahrishi Valmiki B.Ed College, Maharaja Agrasen College, Shaheed Rajguru College of Applied Sciences for Women, Deen Dayal Upadhyay College, Indira Gandhi College of Physical Education, Bhaskaracharya College, Acharya Narendra Dev Women's College, Keshav Mahavidyalaya, Bhagini Nivedita Women's College and Aditi Mahavidyalaya. (ANI)