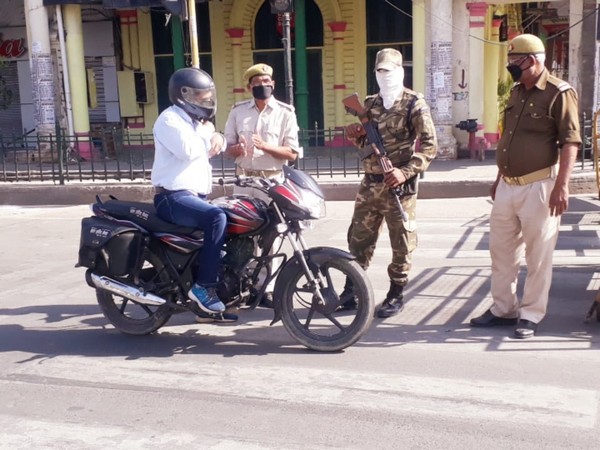 Lucknow (Uttar Pradesh) [India], Mar 26 (ANI): With almost deserted lanes in one of the busiest markets of the city and positions marked on the roads for social distancing outside shops selling essential edible items, people in Lucknow seem to have been implementing the new directives quite well.

The city has been in lockdown since the government ordered the people not to venture out unnecessarily, with only shops selling groceries, milk, bread, and vegetables operating regularly.
Chief Minister Yogi Adityanath has assured the people of the state that district administration and all other departments will ensure delivery of ration at the doorstep during lockdown period.
Since then, streets have gone into utter silence. The police is regularly inquiring the people seen twice or thrice in a day at various check points across the city.
The cops are also sending back homes those driving without helmets, seat belts and loitering out of the houses without valid reasons.
The Uttar Pradesh state has so far reported above 40 cases of the contagious infection.
Prime Minister Narendra Modi on Tuesday announced a 21-day lockdown in the entire country effective from midnight to deal with the spread of coronavirus, saying that "social distancing" is the only option to deal with the disease, which spreads rapidly.
In a televised address to the nation, Prime Minister Modi said that it is vital to break the chain of the disease and experts have said that at least 21 days are needed for it. (ANI)