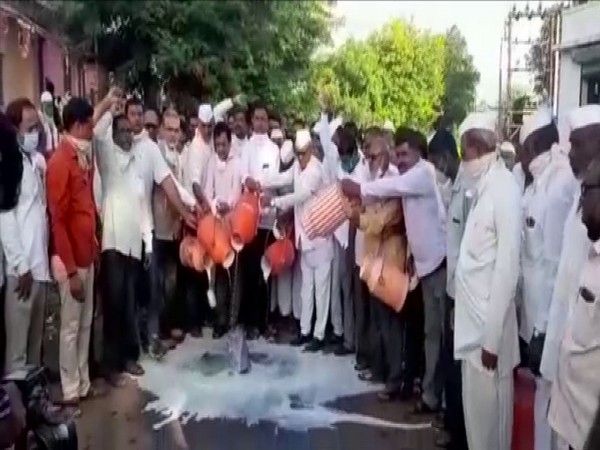 Ahmednagar (Maharashtra) [India], August 1 (ANI): As the milk producers' protest intensified in Maharashtra, All India Kisan Sabha (AIKS) on Saturday demanded that the state government should make a policy so that milk producers should get Rs 30 per litre as the price of milk.

In Palghar, farmers distributed milk to poor people for free and also spilled milk as a mark of protest demanding higher prices.
"Under the aegis of Milk Producers' Committee and All India Kisan Sabha, the milk producers have started protests across the state. Our demand is that the milk producers should get at least Rs 30 per litre as the price of milk for which the government should make a policy," General Secretary of AIKS Maharashtra, Ajit Navale said.
"The state government must give a direct subsidy of Rs 10 per litre to all milk producers so that they get the price of Rs 30 per litre that they were getting before the lockdown. The price that farmers are getting now has collapsed to Rs 17. Meanwhile, milk is continuing to be sold to consumers at Rs 48 per litre," AIKS had said in a release on Friday.
"The central government must immediately take back the June 26 notification clearing imports of 10 lakh tonnes of milk powder, which will destroy the lives of dairy farmers all over India," it added.
AIKS said that the central government must immediately rescind its decision to import milk and milk products from the USA in return for export of generic medicines to that country.
"An export subsidy of Rs 50 per kg must be given for the large stocks of milk powder that are lying in the country's godowns," it further demanded.
The scheme earlier announced by the state government of buying 10 lakh litres of milk per day was limited to only about 24 per cent of the milk companies and thus failed to benefit farmers, AIKS added. (ANI)