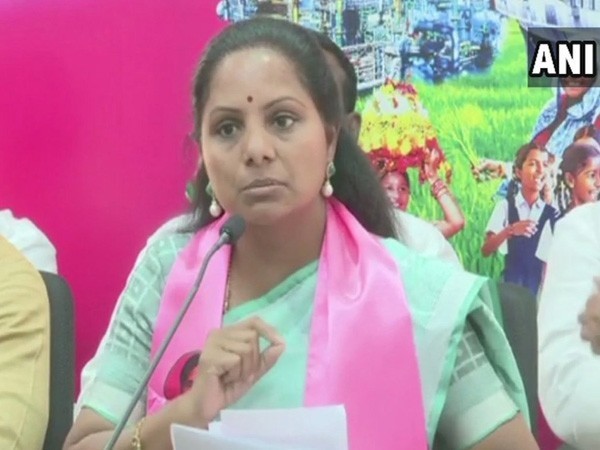 Hyderabad (Telangana) [India], November 23 (ANI): Telangana MLC Nizamabad Kalvakuntla Kavitha on Sunday slammed the Bharatiya Janata Party (BJP) over their alleged "charge sheet" against the Greater Hyderabad Municipal Corporation (GHMC) body, saying that by leveling accusations at other parties in every election where it is not in power, the BJP was actually questioning the mandate of the people.

This comes after Union Minister Prakash Javadekar's allegations that the assets of Chief Minister K Chandrashekar Rao and his friends were increasing but the assets of the state government were decreasing.
Speaking to ANI, Kavitha said that the Telangana Rashtra Samithi (TRS) owed no explanation to the BJP and leveling such allegations implied that they were questioning the people's mandate.
"The basic template that the BJP follows in every election where it is not in power is to level accusations at other parties. We owe no explanation to the BJP over the latter's accusations. The KCR-led TRS is a democratically elected government and leveling such allegations against the party would imply questioning people's mandate," said Kavitha, who is also the daughter of CM K Chandrashekar Rao.
She further said, "The BJP shows hypocrisy and partiality in states where it is not in power. No additional funding was ever given to Telangana which was carved only six years ago. Their discrimination was also witnessed when in the recent GHMC floods, the Centre released over Rs 600 crore for Karnataka but nothing was given to Hyderabad. The BJP did not support Telangana and its people and in the upcoming GHMC elections, Hyderabad will also not support the BJP."
"The people of GHMC will bring the TRS party back with a greater number and we will cross the 99 seat mark," she added.
Elections for the GHMC will be held on December 1 and results will be declared after counting of votes on December 4. (ANI)