Modi, Xi to work together to overcome 'common challenges' of terrorism, radicalisation 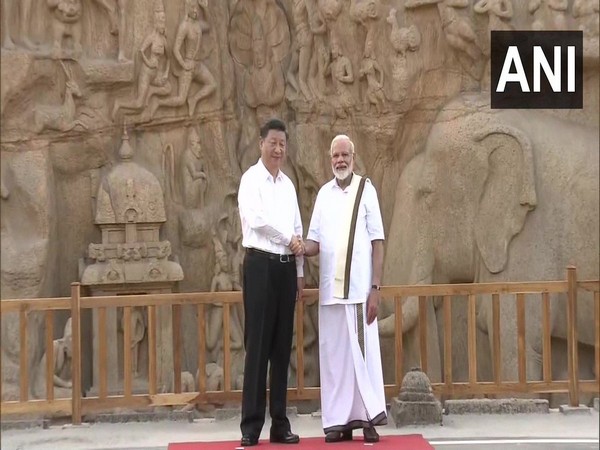 Chennai (Tamil Nadu) [India], Oct 12 (ANI): Prime Minister Narendra Modi and President Xi Jinping on Friday discussed the challenges posed by terrorism and radicalisation to the two countries and said they will work together to overcome the "common challenges".

Briefing reporters on the first day of the informal summit between the two leaders, Foreign Secretary Vijay K. Gokhale said that the discussions between the two leaders over dinner extended to nearly two-and-a-half-hour, well beyond the planned time.
"The discussions were very open and cordial. This was quality time that the two leaders spent together one on one. The rest of the two delegations were in a separate location having dinner," Gokhale said.
He added that the two leaders discussed the challenges they face on account of terrorism and said both would work together to see that radicalisation and terrorism do not affect the fabric of Indian and China's multi-ethnic, multi-cultural and multi-religious societies.
"Some of the other topics included the challenges that both countries face on account of terrorism. There was an acknowledgement that both countries are very complex, they are very diverse. Both leaders said these were large countries and that radicalisation was a matter of concern to both and that both would work together to see that radicalisation and terrorism does not affect the fabric of our multi-ethnic, multi-cultural, multi-religious societies," he said.
"There was a general sense that both leaders had that this was a common challenge we face and we will work together to overcome it," he added.
The two leaders had a detailed discussion on their respective national visions, on their governance priorities. They also discussed trade and investment.
Gokhale said the discussions on Friday focused on the national visions and how to progress bilateral relations.
"Tomorrow's discussions, where they will be continuing one-to-one meetings, will focus on international issues and regional issues and though the two leaders free discuss all other issues as well," he said.
It is the second informal summit between Modi and Xi. The first informal summit was held in Wuhan last year. (ANI)