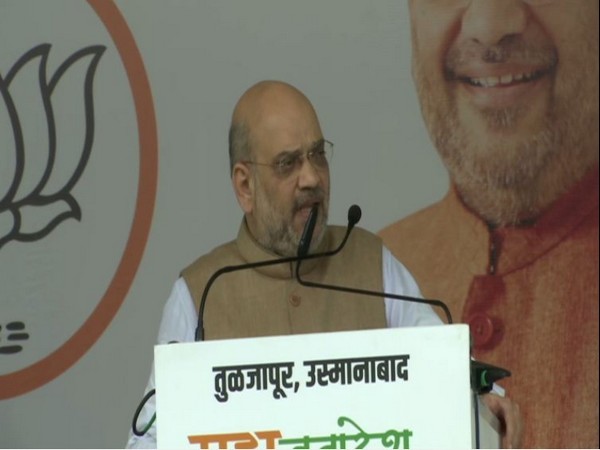 Osmanabad (Maharashtra): Union Home Minister and BJP Chief Amit Shah on Thursday accused the Congress and NCP of opposing National Register of Citizens (NRC) and said the Modi government will remove intruders from the country by 2024.

Addressing an election rally here, Shah said the government will implement NRC.
"We want to bring the NRC to remove infiltrators from the country. But the Congress and NCP protesting against it? When they come to seek votes, ask them why they are protecting intruders. The Modi government will remove every infiltrator from India by 2024," he said.
Shah said Pakistan had been taking advantage of Article 370 for its nefarious designs in Jammu and Kashmir and Prime Minister Narendra Modi had repealed it within weeks of coming to office in the second term. He said over 40,000 people had lost their lives in violence in the state.
"We worry about the future of India more than politics. Congress thrives on vote-bank politics, and not on nationalism," Shah said.
"PM Modi ensured that the crown of India was mainstreamed and becomes an integral part of the Indian Union," he said.
Shah alleged that Congress and NCP did not want repeal of Article 370 for their political interests.
"Do national security and development of Kashmir mean nothing to NCP?" Shah asked.
The BJP chief said that the "double-decker" of Modi and Devendra has shown a new path of development to Maharashtra.
"We gave Devendraji the opportunity to work for five years and Maharashtra is back on track to become one of the best states in India. I want to ask NCP's Sharad Pawar and Congress leaders what have you done with during your regime of 15 years in the state and 10 years in the Centre. In the last five years in Maharashtra, not a single allegation of corruption has been levelled against the Devendra Fadnavis government," he said.
Shah accused NCP and Congress of promoting family rule.
"On one side of this Maharashtra election is a party that is trying to promote its family, and on the other is a party that is trying to make the nation safer and better," he said.
He took a jibe at Congress leader Rahul Gandhi over his visit abroad ahead of elections.
"Rahul has come from abroad. He does not like the hot season here. That's why he used to visit foreign countries in a regular interval."
He alleged that Rahul and Pakistan speak the same language.
"Both Rahul Gandhi and people from Pakistan want proof of the surgical strikes. Rahul Gandhi also protests against the abrogation of Article 370 and 35A, exactly like Pakistan. I don't understand why Pakistan and Rahul speak the same language," he said.
Referring to Congress criticism that Modi visits foreign countries frequently, Shah said he had been told that former Prime Minister Manmohan Singh had visited foreign countries more often and alleged that the Congress used to carry paper from party president Sonia Gandhi.
Shah said Modi had raised India's stature abroad. Referring to the `Howdy Modi' event, he said US President Trump had referred to Modi as popular leader.
Maharashtra will go to polls on October 21 and the counting of votes will take place on October 24.