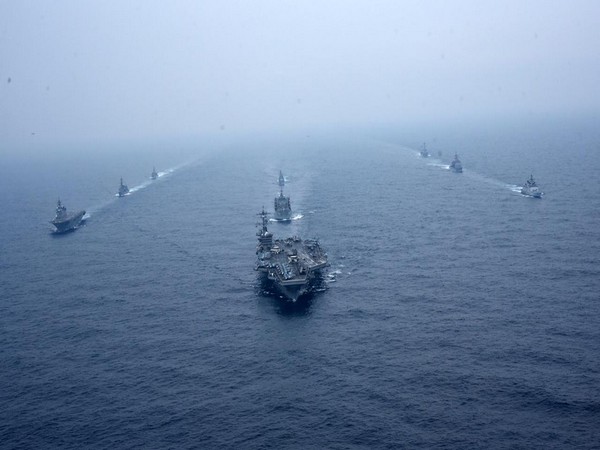 The second phase of Naval Exercise Malabar 21 kicked off in the Bay of Bengal on Tuesday for a "free, open and inclusive" Indo-Pacific.
The exercise has the participation of nine ships including US Aircraft carrier USS Carl Vinson (CVN 70), Japanese Helicopter Carrier JS Kaga (DDH 184), USS Lake Champlain (CG 57), USS Stockdale (DDG 106), HMAS Sirius (O266), HMAS Ballarat FFH 155) and JS Marasame (DD 101).
The Second Phase of the exercise is focusing on advanced surface and anti-submarine warfare exercises, seamanship evolution and weapon firings.
The Indian Navy is participating in the sea phase of Exercise Malabar 2021 along with the US Navy (USN), Japanese Maritime Self Defence Force (JMSDF) and the Royal Australian Navy (RAN), the Ministry of Defence had informed earlier.
The exercise is being conducted in the Bay of Bengal from October 12-15. The first phase of the exercise was conducted in the Philippines Sea from August 26-29. (ANI)