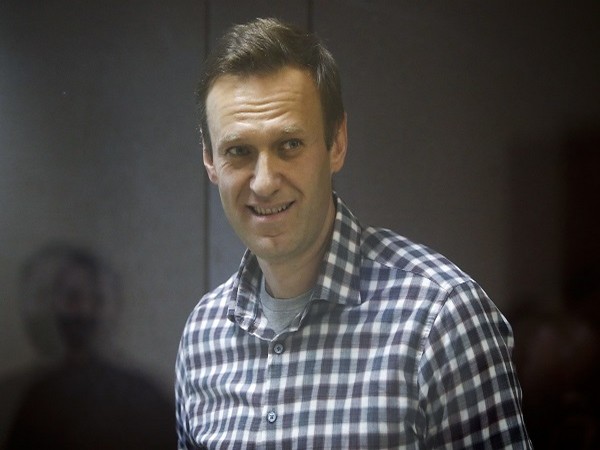 Moscow [Russia], April 8 (ANI): Jailed Russian opposition leader Alexey Navalny is continuing his hunger strike despite a high temperature and a bad cough, according to a post shared by his team on his official Instagram account.

According to CNN, the Russian opposition leader went on a hunger strike last week to protest against prison officials' refusal to grant him access to proper medical care. He had been suffering from acute back pain that had affected his ability to walk and his condition was being exacerbated by alleged "torture by sleep deprivation," one of his lawyers said last month.
Navalny said that the prison didn't have the sustenance and nutrients required to keep inmates healthy, adding his temperature was recorded as 38.1 degrees Celsius (100.6 Fahrenheit) and that he had a severe cough.
Navalny's lawyer Vadim Kobzev told CNN on Wednesday that the Kremlin said on Tuesday that he will not receive any special conditions or treatment during his time in prison. He has been tested for Covid-19 and the result is negative.
In the post on Monday, Navalny also said there was a tuberculosis outbreak amongst his cellmates, with three out of the group's 15 prisoners recently hospitalized with the disease.
"And what? Do you think there is a state of emergency, ambulance sirens are blaring? No one cares, the bosses are worried only about how to hide the statistics," Navalny said in the post, according to CNN.
An opposition-linked doctors' union, Doctors' Alliance, scheduled a protest in support of the Russian President Vladimir Putin critic on Tuesday outside the penal colony No.2 in Pokrov, where the Kremlin critic is being held. The group is run by an ally of Navalny who said the protesters will demand proper medical attention for the opposition figure.
Kremlin spokesman Dmitry Peskov said he's aware of reports that Navalny was in a medical unit but didn't elaborate further. Peskov said that the leader's treatment was a matter for the prison services and that he would not get any special treatment.
"All the necessary activities are carried out there. And naturally, there can be no talk of any special conditions for one of the convicts. There are certain rules, including rules for the treatment of prisoners who are sick. Therefore, if we are really talking about a disease, then treatment will be provided at the prescribed level," the Kremlin spokesman said during a conference call with journalists on Tuesday.
Navalny, a long-time critic of President Vladimir Putin, was jailed earlier this year for violating the probation terms of a 2014 case in which he received a suspended sentence of three and a half years.
A Moscow court took into account the 11 months Navalny had already spent under house arrest as part of the decision and replaced the remainder of the suspended sentence with a prison term last month. (ANI)