Night curfew to be imposed in Bengaluru, 6 other cities in Karnataka from April 10 between 10 pm to 5 am 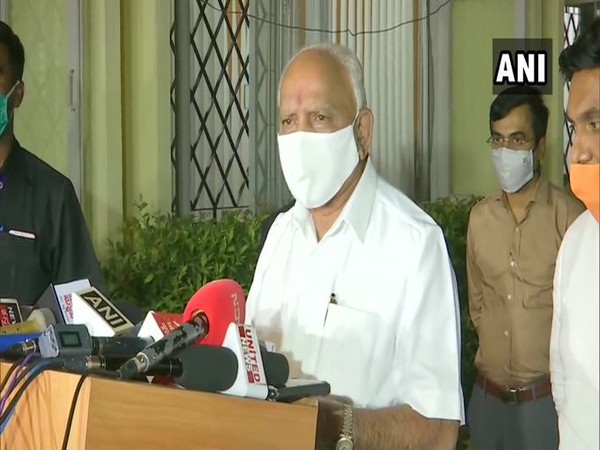 Bengaluru (Karnataka) [India], April 9 (ANI): In view of the surge in the coronavirus cases, a night curfew will be enforced in Bengaluru and six other cities in Karnataka from 10 pm to 5 am starting Saturday, Chief Minister BS Yediyurappa announced.

The curfew will remain in place till April 20, Yediyurappa said while addressing a press conference after attending the virtual meeting with Prime Minister Narendra Modi on Thursday.
He said, "'Corona curfew' (night curfew) will be imposed between 10 pm-5 am from April 10th to April 20th in Bengaluru, Mysuru, Mangaluru, Kalaburagi, Bidar, Tumkuru, Udupi-Manipal. Essential services will be exempted from these."
"Vaccination drive will be taken up from April 11 (Jyotiba Phule's birthday) till April 14 (Ambedkar's birthday)," he said.
While elaborating other restrictions, he said, "The government has prohibited gatherings for fairs and festivals and other religious and social gatherings and ensuring the same is complied with. Action has been initiated to impose penalties on those who do not wear a mask and maintain distancing in public places."
"The government has taken up vaccination drive at a large scale. About 6,000 vaccination centres are working daily. Of these, 5,400 are in government facilities and 600 in private facilities. So far, we have vaccinated more than 53 lakh people. We have vaccinated 22.31 pc of the target population above 45 years of age as compared to the National Average of 13.94 pc as on April 5", Yediyurappa said.
"We have taken utmost care to minimize the vaccine wastage. Due to the surge, we have doubled the number of tests to about 1.20 lakh now. These days, more than 95 pc of the tests are being conducted using the RT-PCR method," the Chief Minister said.
"We have ramped up the number of general beds, oxygenated beds and ICUs. We have more than 42,000 general beds, 30,000 oxygenated beds, 3,000 ICUs and 2,900 beds with Ventilators in general hospitals," he said.
"The government sought PM Modi's assistance to provide oxygen generators from PM-CARES fund to decrease the load on oxygen manufacturing. Our government are taking all possible measures to contain the pandemic and hope to succeed in it with support from the Central Government. But co-operation and responsible behaviour of the citizens matters the most. So, I appeal to the people of the State to follow all the guidelines issued by the Government from time to time and help us contain the pandemic," he said.
"Ten States---Maharashtra, Chhattisgarh, Karnataka, Uttar Pradesh, Delhi, Madhya Pradesh, Tamil Nadu, Gujarat, Kerala and Punjab have shown a rise in the COVID daily new cases. 84.21 pc of the new cases are reported from these 10 states", as per the Union Health Ministry on Thursday.
With 1,26,789 new cases in the last 24 hours, India's active caseload reached 9,10,319 on Thursday.India reported 59,258 recoveries were registered in the last 24 hours, taking the cumulative recoveries to 1,18,51,393. The national Recovery Rate is 91.67 per cent. (ANI)