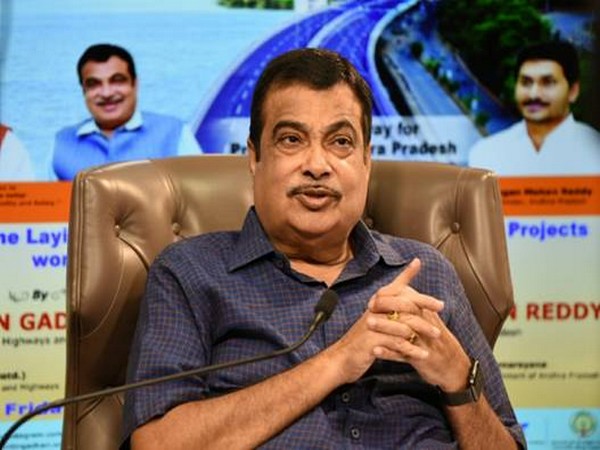 New Delhi [India], October 17 (ANI): In a bid to prevent the floods that occur in Maharashtra ever year causing loss of lives and property, Union Minister Nitin Gadkari has written a letter to the state's Chief Minister Uddhav Thackeray and others suggesting the state to take up the ambitious project of formation of a State Water Grid on the lines of the National Power Grid and Highway Grid.

Gadkari, Union Minister of Road Transport and Highway, said the idea behind the grid is to divert the floodwater from one river basin to another in the drought-prone areas of the state.
"I am writing this letter to draw your attention toward the serious issue of heavy loss of lives and property that occur in the state of Maharashtra every year due to floods. The floods create and trigger serious problems in different parts of the state and there is an urgent need to chalk out a plan to manage this natural disaster that becomes grave because of other man-made factors," Gadkari said in the letter dated October 14.
He said the areas with a shortage of water, scanty of rainfall can get relief by the grid and added that this would also help increase the irrigation significantly and decline in the number of suicides of farmers.
"Through you, the Maharashtra government is requested to take initiative for preparations of the DPR (detailed project report) for the formation of a State Water Grid to overcome the recurring crisis of the floods. This would help the government to ensure the availability of the water in drought-prone areas and save the resources to manage the flood crisis," Gadkari said.
It said that various studies have shown that the incidents of the farmers' suicide have come down in the areas where the irrigation cover is more than 55 per cent.
"This would also help to increase agriculture produce and strengthen the rural and national economy. The diverted floodwaters would relieve the stress on the local resources. Transportation of goods and passengers through rivers (Water Transport) can be commenced in near future," the letter said.
"Fishing and other businesses can flourish alongside and major employment can be generated if such a project is taken up as essential infrastructure. It is pertinent to mention here that, though my Ministry pertains to the development of National Highways, my interest is Water Conservation, as I believe that water conservation can change the picture of Maharashtra and the nation," it added.
Gadkari said the synchronization of national highway construction and water conservation results not only in increasing water storage capacity but saving the environment. (ANI)