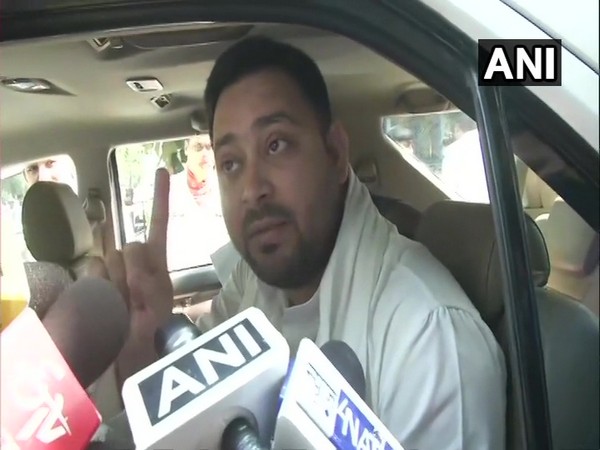 "Nitish Kumar's first and last love is the Chief Minister's chair. Does he have a vision for Bihar? If yes, then why doesn't he share it? How will he eliminate unemployment? Why does he not speak on migration, poverty, starvation? Youth knows that if NDA isn't defeated, such a useless government won't do anything for the unemployed," Tejashwi Yadav said.
"In the greed of power, Nitish-BJP has ruined two generations of Bihar. Due to the wrong policies and decisions of the Chief Minister, today Bihar has become the centre of unemployment. The lives of crores of youth are bleak. Why does the CM never speak on these important and burning issues?" he added.
RJD leader reiterated that if Mahagathbandh (grand alliance) is voted to power, they would provide 10 lakh jobs to youth in Bihar.
Taking a jibe at the chief minister, he said that US President Donald Trump will not come to state and accord special category status to the state. Yadav made these remarks while releasing Mahagathbandhan's manifesto for the upcoming Bihar elections.

"Bihar has a double engine government. Nitish Kumar has been governing the state for the last 15 years but the state has not been accorded the special category status yet. US President Donald Trump will not come and accord that," Tejashwi Yadav said.

"Prime Minister Narendra Modi in 2015 said that he will sip a cup of tea of Motiari's Sugar mill. But you can see that in Bihar: Sugar Mill, Jute mill, Papermill, Rice mill are shut. No food processing units have established. As many as 60 scams took place in this regime. Crime has increased. JDU- BJP has stabbed Bihar in the back," he added.
In the forthcoming Assembly polls, the (LJP) will not contest seats where BJP will be contesting, however, it will fight against Janata Dal (United).
Bihar with 243 Assembly seats will go to polls in three phases: October 28, November 3 and November 7. The results are scheduled to be declared on November 10. (ANI)
Congress, CPI, CPM are part of the grand alliance, 'Mahagathbandhan' under the leadership of Rashtriya Janata Dal (RJD) while both JDU and LJP are in a pre-poll alliance with the BJP. (ANI)