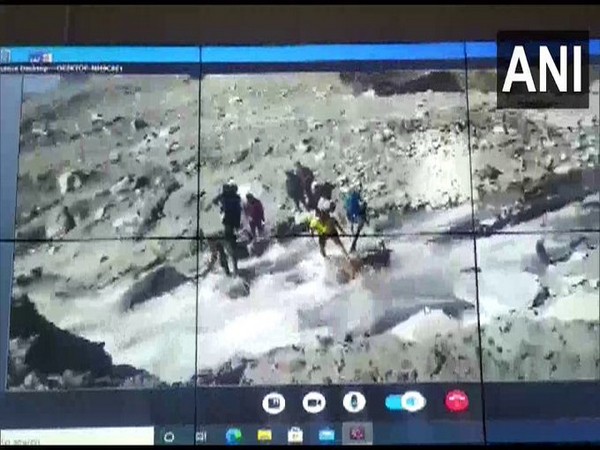 New Delhi [India], February 22 (ANI): There is no imminent danger in the artificial lake formed after the avalanche in Chamoli district of Uttarakhand as the volume of water is less than expected and is flowing through a natural channel that has been widened, informed the Uttarakhand Chief Secretary on Monday.

Union Home Secretary Ajay Bhalla on Monday held a meeting with Uttarakhand Chief Secretary Om Prakash and other top officials via video conferencing to review the status of the artificial lake formed in wake of an avalanche incident in the upper catchment of the Rishiganga River in Chamoli District on February 7.
The Uttarakhand Chief Secretary informed that based on the physical assessment of the artificial lake made on the site by multiple scientific agencies and satellite data, there is no imminent danger as the volume of water is less than expected and is flowing through a natural channel that has been widened, according to a press statement.
The meeting was also attended by the Director General (DG) of Indo-Tibetan Border Police (ITBP), Director General of National Disaster Response Force (NDRF), Member Secretary of National Disaster Management Authority (NDMA), Chairman of Defence Research and Development Organisation, senior Power Ministry officials, Integrated Defence Staff officials and scientists from various Central agencies.
The DRDO Secretary and the State administration have been asked to keep a continuous watch on the situation in coordination with central and state agencies.
Out of 206 people missing in the flash flood, bodies of 70 people and 29 body parts have been recovered from Tapovan in Chamoli district so far, said Chamoli Police.
Moreover, the SDRF team in Dehradun constantly monitoring the situation of the artificial lake formed in the upper reaches of Chamoli district, at control room via Quick Deployment Antenna (QDA) system. (ANI)