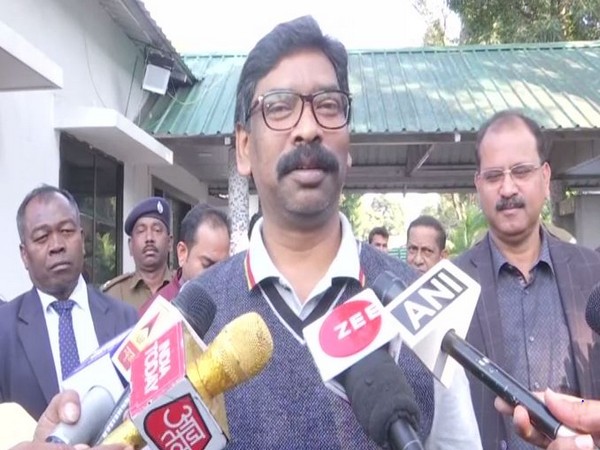 Ranchi (Jharkhand) [India], Feb 1 (ANI): Jharkhand Chief Minister Hemant Soren on Saturday said that Finance Minister Nirmala Sitharaman, during her budget speech did not mention anything about unemployment and inflation.

"The Finance Minister gave a speech for around three hours, in my knowledge nobody has ever given such a long budget speech. During this long speech, there was no mention of unemployment and inflation that how will the government fight against these issues. All these things were not mentioned during the budget presentation," said Soren while speaking to the reporters.
"The Finance Minister also did not mention how much money is to be spent in each sector. Also, the middle-class people have been given minor tax relief. So, I think middle-class people would also be disappointed by this budget. This is not BJP's budget, it is Bharatiya Businessmen Party's (BJP) budget," he added.
Soren said that as per his knowledge Jharkhand will be getting a museum but he had urged Prime Minister Narendra Modi for a Tribal University here.
"I think preparations are underway to keep the tribals inside the museum here. Let's see what happens next," he added.
Finance Minister Nirmala Sitharaman today presented her second Union Budget.
In the longest Union Budget speech in history, Sitharaman talked about tax regime, finance, agriculture, irrigation, water, sanitation, healthcare, education, infrastructure, women, digital connectivity among others. (ANI)