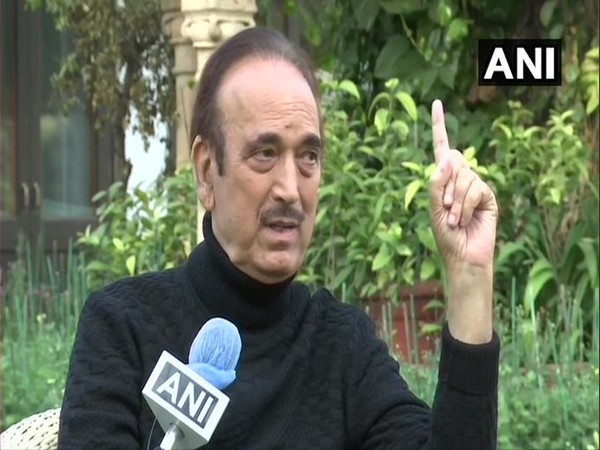 New Delhi [India], November 22 (ANI): Congress leader Ghulam Nabi Azad on Sunday categorically denied that there is rebellion in the party. Azad, however, added that some leaders are looking for reforms, which will ultimately help in revitalizing the party.

"There is no rebellion in Congres party, we are looking for reform. Rebellion means replacing someone. There is no other candidate for the post of party president. This is not a rebellion. This is for reforms. We are the ones who believe in directing what is necessary (for the betterment of the party)," Azad told ANI.
On being asked if Congress is going through an existential crisis as it contested on 70 seats in recently concluded Bihar Assembly polls and managed to win just 19, Azad said, "There is a need to revitalize and for that, we need to think of a new formula. We have to change the system."
The Congress party's strike rate was poorest among the alliance partners in the recently held Bihar assembly elections, in which even the Left performed better in the state which is not usually considered as their stronghold.
"We all are worried about losses, especially about Bihar and by-polls results. I don't blame the leadership for the loss. Our people have lost the connection on the ground. One should have a passion for their party and to do everything for that," he added.
The Congress party veteran, however, emphasized that grassroot leadership is required for the betterment of the party and said, "Polls are not fought by 5-star culture. The problem with leaders today is if they get a party ticket, they first book a 5-star hotel. They won't go if there's a rough road. Till the time 5-star culture is given up, one can't win elections."
"Office bearers should understand their responsibility. Till the time, office bearers are appointed, they won't go. But if all office bearers are elected, then they will understand their responsibility. Right now, anyone gets any post in the party," Azad said while indicating about a letter written by several Congress leaders to the Congress president in August calling for sweeping changes in the party's functioning.
The letter reportedly mentioned many suggestions such as the need for a full-time leadership available at the national and state headquarters, conducting elections at all levels including the Congress Working Committee and state level, the formation of an Independent Election Authority, and institutional leadership mechanism to guide the party's revival.
The Congress leader added, till the time, there is a change in functioning at every level, things won't change.
"Leadership needs to give a programme to party workers and hold elections for posts. One should be so much indispensable that leadership asks for you in your absence," said Azad.
Reiterating that he has no problem or issue against the high command of the party, he said, "I'm giving a clean chit to Gandhis due to Covid pandemic as they can't do much right now. There's no change in our demands. They've agreed to most of our demands. Our leadership should hold elections if they want to become a national alternative and revive the party."
The senior leader further stated that Congress is at its lowest in the last 72 years.
"Nobody else can become a national alternative for BJP, BJP is a national party. For a national party, your thinking should be national, national presence is also important, secular thinking is also required. Congress is at its lowest in the last 72 years. Congress does not have even the post of Leader of Opposition in Lok Sabha during the last two terms. But Congress won 9 seats in Ladakh hill council elections even as we were not expecting such a positive result," said Azad.
"In order to revive Congress party and to make it a national alternative, it is important o conduct election on the block to the national level, there is a need to provide programme to the party and accountability is also must," he added.
Azad asserted that their party structure has collapsed and there is a need to rebuild the structure.
"Our party's structure has collapsed. We need to rebuild our structure and then if any leader is elected in that structure, it will work. But saying that just by changing the leader, we'll win Bihar, UP, MP, etc. is wrong. That will happen once we change the system," said Azad.
On the recent abysmal performance of the party in the Bihar assembly election, senior leader Kapil Sibal has also asked for an urgent need for introspection for the party's leadership.
Sibal, who is among 23 leaders who wrote a letter to Sonia Gandhi demanding sweeping changes in the party, also said in the interview that reluctance to address issues was because the Congress Working Committee was "a nominated body".(ANI)