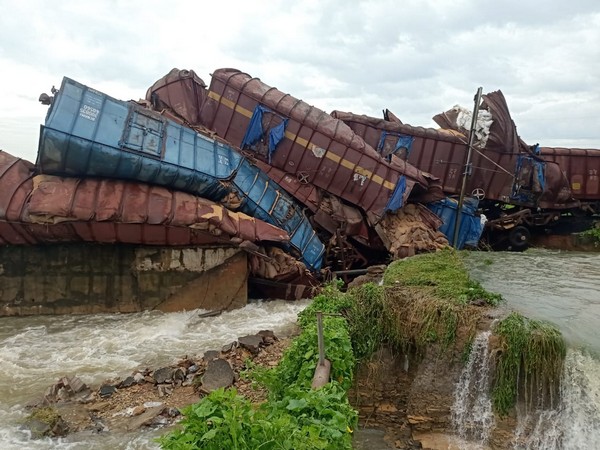 Bhubaneshwar (Odisha) [India], September 14 (ANI): Nine wagons of a goods train have capsized and one derailed between Angul and Talcher Road on Tuesday, informed East Coast Railways in a statement.

Accident Relief Train from both Sambalpur direction and Khurda Road direction had rushed to the spot. There are no casualties reported.
According to the East Coast Railways, the accident happened around 2:35 am and a goods train from Firoz Nagar to Khurda Road left Angul Station at 0215hrs and derailed KMs 167/2 between Angul and Talcher Road (2km from Talcher Road).
Divisional Railway Manager, Khurda Road has rushed to the site and reviewing the restoration and re-railing works.
"Prima facie cause of the derailment is due to bank slip-on box bridge approach due to flash flood. The box girder is intact. The retaining walls on both sides have been damaged. Washout of track on the approach to the bridge on the left side from Angul," the release said.
"Crane from Sambalpur will tackle wagons from Angul side and crane from Khurda Road will tackle engine and then wagons from Talcher side. Heavy water flow is still continuing near the washout area. JCB has been mobilized to create a diversion so as to reduce water flow for filling the breach," stated in the release.
Earlier there was a report about a goods train derailed between Angul and Talcher Road single line railway section and train services affected in the Dhenkanal-Sambalpur Rail Section. As a result, some of the trains were cancelled, diverted, short terminated and rescheduled. (ANI)