Once a soldier, always a soldier, says Rajnath Singh at Veterans' Day celebrations in Bengaluru 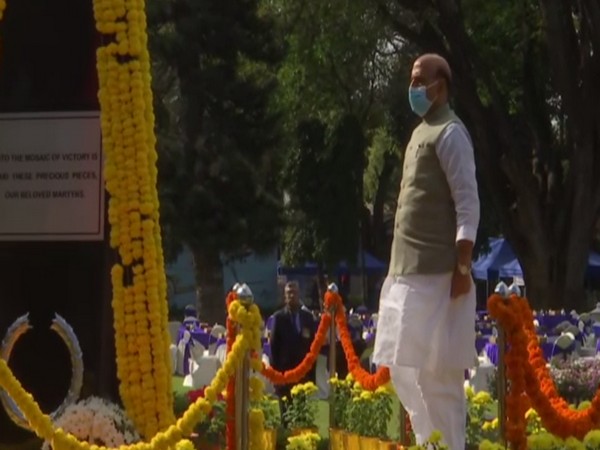 Bengaluru (Karnataka) [India], January 14 (ANI): Lauding the "sense of national pride" showcased by the Armed Forces during the decades-long military history of the country, Defence Minister Rajnath Singh on Thursday asserted that with the acquisition of 83 indigenous LCA Tejas fighter jets from HAL more than 50,000 job opportunities will be generated in the country.

"I believe once a soldier, always a soldier. The society draws inspiration from the Veterans' of the armed forces. They have an important role to play in the society," said Defence Minister while addressing an event at IAF HQ Training Command.
Over the approval of defence deal to buy 83 LCA Tejas, Defence Minister said, "We have given approval for the acquisition of 83 indigenous LCA Tejas fighter jets from HAL. This decision will help generate more than 50,000 job opportunities in the country."
On the ongoing situation at the border areas of Pakistan and China, Rajnath Singh said, "Indian forces are facing enemies at all fronts. We have not only managed to tackle terrorists at our home soil but also combated terrorists in Pakistan."
"India does not want to get into war or conflict with anyone. We want peace with all the countries including our neighbours. We want friendship with everyone as this very spirit runs in our blood and culture," he added.
Issuing a stern message to its rivals, he said, "If someone will try to hurt our pride then we are capable enough to respond to them in an appropriate manner. ...You are well aware of what all is happening at the India-Pakistan border. How India is giving a befitting reply to the ceasefire violations." "You must also be all aware of the India-China standoff."
"I cannot express in words how grateful I am for all the Veterans' for your service," he added.
Appreciating the country's Armed forces, Defence Minister said, "I would like to praise the sense of national pride which inspires the armed forces to lay their lives for the sake of the country. Even during our freedom movement, this very spirit helped us unlock the shackles of the British Raj."
Talking about the recent initiative taken by the Centre for the Veterans', he said, "We have authorized the Local Formation Commanders to include private hospitals in the ECHS (Ex-servicemen Contributory Health Scheme) panel."
Talking about the Makar Sankranti festival, he said, "January 14 represents both 'Jai Jawan' and 'Jai Kisan' because the day is celebrated as Veterans' Day and Makar Sankranti/Bihu, harvest festival."
At the 'Veterans' Day' celebrations here, Rajnath Singh also accompanied by Chief of Defence Staff (CDS) General Bipin Rawat. Prior to his speech he laid a wreath on the fifth Armed Forces Veteran Day.
The Armed Forces Veterans' Day is celebrated as a mark of respect and recognition to the services rendered by the first Commander-in-Chief of Indian Army, Field Marshal KM Cariappa. (ANI)