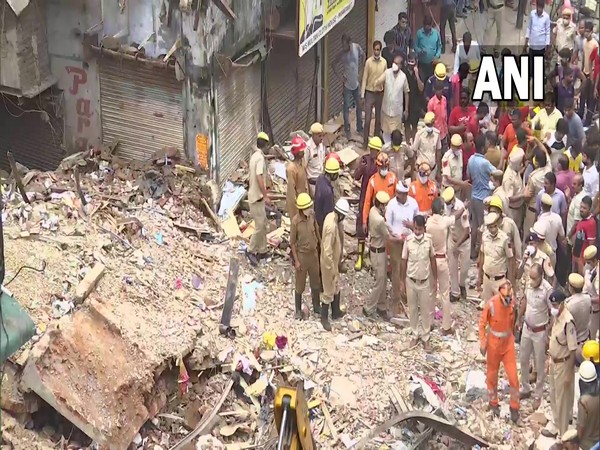 New Delhi [India], September 14 (ANI): Delhi police on Tuesday arrested one person in connection with the collapse of a four-storey building in the Sabzi Mandi area of Delhi on Monday, police said.

The police arrested Mohak Arora, who had an electrical equipment shop on the ground floor of the same four-storey building that collapsed on Monday.
The police have registered a case against him under various sections of the Indian Penal Code including section 304.
At least two people were killed while one other was rescued after a four-storey building collapsed in the Sabzi Mandi area of Delhi on Monday.
According to NS Bundela, Joint Commissioner of Police, Central Range (Delhi), teams of local police, Municipal Corporation of Delhi (MCD), National Disaster Response Force (NDRF) among others are present to undertake rescue operations.
"Two children, who were passing by the building died during the collapse. One person has been rescued so far. He sustained a head injury and has been sent to hospital Further, the relief and rescue operation is being carried out," said Bundela.
Asked about the amount of damage due to the accident, the Joint CP said, "We need time to assess the number of people stuck under debris."
North Delhi Municipal Corporation is probing the cause of the building collapse.
"Relief and rescue work is underway. Probe on to find out if any load-bearing wall inside the building was affected which led to the collapse," Sanjay Goel, Commissioner, North Delhi Municipal Corporation.
"Bodies of two minors have been found, no other body was found in the rubble," said Anto Alphonse, DCP North, Delhi Police. (ANI)