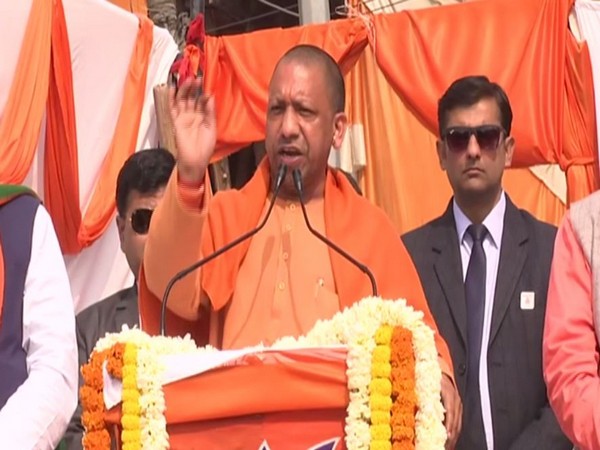 Delhi [India], Feb 1 (ANI): Uttar Pradesh Chief Minister Yogi Adityanath on Saturday addressed an election campaign rally in Karawal Nagar constituency of Delhi and said that only Bharatiya Janata Party (BJP) can provide security to each and every citizen of India by dealing strictly with the menace of terrorism and naxals.

Addressing his first poll campaign rally in the national capital for the 2020 assembly polls, Adityanath said, "Only BJP can deal with criminals, terrorists, and Naxalites and can provide security to every citizen of India. Congress and AAP cannot do it."
The Uttar Pradesh Chief Minister, who has been a vocal critic of anti-CAA protestors and has slammed them with scathing remarks, also invoked the issue during his address and said, "Protests are happening in different parts of Delhi. These protests aren't against the citizenship act but it is over India's growing stature in the world and over restricting this rise. They are perturbed over the fact that their ancestors divided India but now the country has become united and great."
He also blamed the Aam Aadmi Party and Congress for these protests while outlining the measures adopted by the Uttar Pradesh government to deal with those damaging public property.
"By protesting against Citizenship Act, sloganeering in favour of Pakistan, damaging public property and indulging in arson, what do these people of Congress and AAP want to prove? In UP we have made it very clear that who so ever damages the public property will also have to pay for it. We have also started recovery and are clear to deal with such elements strictly", he said.
Uttar Pradesh Chief Minister also cornered Congress over the Ram temple issue and said, "You may have seen that a Congress office-bearer goes to Supreme Court and argues that Ram Mandir issue should not be resolved. Congress has always been a hurdle on the Ram temple issue."
Adityanath is also scheduled to address rallies in Adarsh Nagar, Narela and Rohini.
Assembly elections will be held in Delhi on February 8 to decide who will rule the national capital for the next five years with the ruling AAP making a determined bid to return to power and the BJP seeking to have a chief minister in the city after 20 years.
The Congress, which has ruled Delhi for 15 successive years, is also making efforts to regain its support base.
Counting of votes will take place on February 11. (ANI)