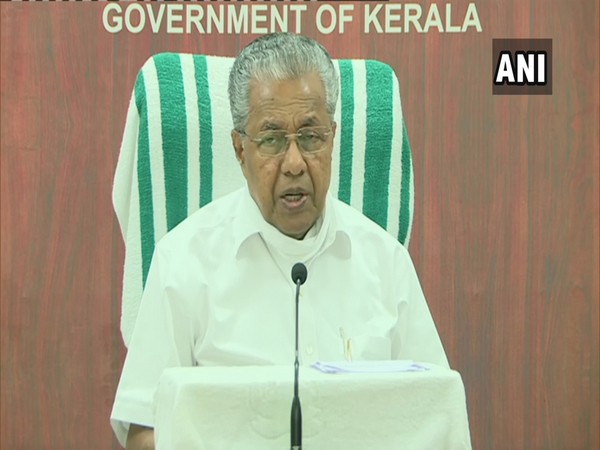 Thiruvananthapuram (Kerala) [India], September 15 (ANI): Hitting out at the Opposition for carrying out protests while violating COVID-19 protocol, Kerala Chief Minister Pinarayi Vijayan said that opposition parties in the state were putting people's lives at risk for "narrow political gains".

Addressing a press meet here on Tuesday, Vijayan said that opposition parties were violating restrictions put in place by the High Court.
"Protests are being carried out without masks and no one is social distancing. Such protests violate the COVID-19 protocol and cannot be allowed. The lives of people cannot be put at risk for narrow political benefits," he said.
Speaking in support of Higher Education Minister KT Jaleel, Kerala Chief Minister said, "Jaleel himself has clarified regarding the help sought by UAE consulate to distribute the Quran. He has done nothing wrong. But those with vested interest are targeting Jaleel. After spreading rumours, the Opposition is trying to create law and order issues in the state. There is nothing wrong with the questioning of Jaleel by the Enforcement Directorate. It is not the first time a minister has been questioned by an investigation agency."
Attacking BJP state president K Surendran who had alleged that Vijayan's daughter had an association with gold smuggling accused Swapna Suresh, the Kerala CM said the Opposition leader had "lost his mind".
"Surendran has lost his mind. BJP should see if such a person should be their president in the state. Without any basis, he is raising unwanted allegations in a bid to defame me and my family members. Their only motive is to depict that the Chief Minister who is heading the Left government is corrupt. I am responding to such allegations with head held high because in my public life I always stood against corruption. I have nothing to fear," Vijayan told the media. (ANI)