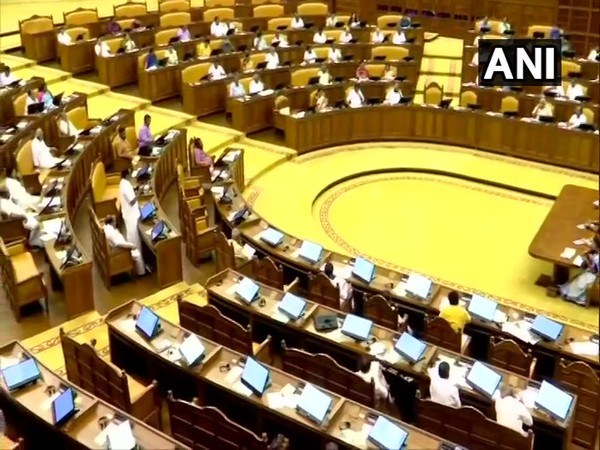 Congress MLA PT Thomas had given the notice to move an adjournment motion on the Gold Smuggling Case and alleged that Chief Minister's office was harbouring those who are involved in gold smuggling and also questioned the association of Chief Minister's daughter with gold smuggling accused Swapna Suresh.
"Chief Minister should make clear whether Swapna Suresh had visited his house a day before a marriage function was held in his family. Chief Minister's additional private secretary CM Raveendran is under the shadow after investigation agencies questioned him. Pinarayi Vijayan will become the first Chief Minister to end up in jail," alleged Thomas when asked whether Vijayan is a 'communist' in a provocative speech.
Kerala Chief Minister Pinarayi Vijayan replied to the allegations and told the House that Swapna Suresh did not visit his house and no family members were questioned by any investigation agencies.
"The central investigation agencies have found that 21 times gold has come to Kerala through the diplomatic channel. It is the duty of the customs to prevent it from happening. What can Chief Minister or CMO have to do with it? Tax evasion through gold smuggling is a serious issue that needs to be clamped down by Customs. The money made through tax evasion is invested in real estate in the state," he said.
Further attacking the opposition, Chief Minister said, "It was Congress president Sonia Gandhi who alleged that investigation agencies are being used to target political opponents. The same Congress party do not agree with it. Even Rahul Gandhi during his Kerala visit had said that ED and CBI are being used to corner political opponents by Centre," he said.
Taking the names of national Congress leaders who were questioned by Central investigation agencies, Chief Minister targeted the opposition bench.
Congress in Kerala is becoming the megaphone of the Bharatiya Janata Party (BJP). If anyone thinks that using central agencies Left Democratic Front (LDF) government can be weakened it cannot be achieved, he said adding that a 'Communist' don't fear any jail.
Before staging the walkout Opposition leader Ramesh Chennithala alleged that Pinarayi Vijayan could not even control his own office, then how can he manage the state?
"CM's office has become a den of gold smugglers. Senior IAS official M Sivasankar controlled CM's office for 51 months. He aided the gold smugglers. Swapna Suresh was a frequent visitor to the CM's office. Don't this Chief Minister receive any intelligence reports?" asked Ramesh.
He further alleged that the Kerala government is trying to sabotage the gold smuggling case.
"Kerala CM changed his opinion on investigation agencies after the notice was served to his additional private secretary CM Raveendran. Till then Chief Minister was giving good certificates to probe agencies," he said.
Kerala Assembly Speaker P Sreeramakrishnan denied permission to move the adjournment motion and the opposition staged a walkout from the Assembly. (ANI)