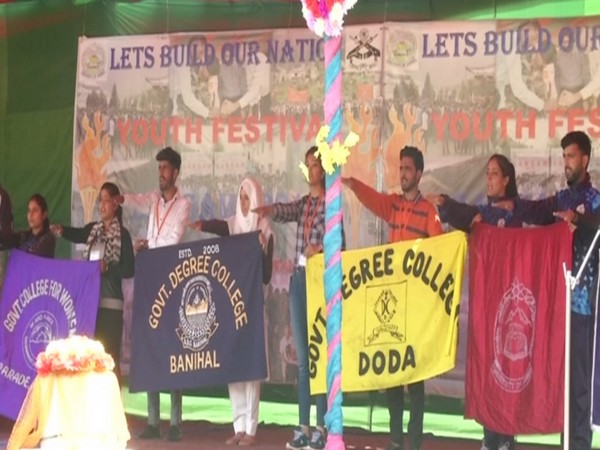 Bhadarwah (Jammu and Kashmir) [India], Oct 12 (ANI): Over 1,500 students from 32 different colleges and university participated in the 'Sangam Youth Festival' being organised by the Indian Army in collaboration with Jammu University Campus in a bid to spread the message of peace, prosperity, communal harmony and national integration.

Northern Army commander Lt General Ranbir Singh also attended the five-day event here on Saturday. He had also inaugurated the event on Friday.
"Sangam Youth Festival is being organised from October 11 to October 15. This year 1,500 students from 32 colleges are participating in the program. During this festival, several events are being organised so the students can showcase their talents and skills," Defence PRO Lt-Col Devender Anand told ANI on Saturday.
He said that a total number of 35 events, including outdoor and indoor activities, have been planned during this festival.
"This event comes in continuation with the Indian army and the administration's effort to engage the youngsters in productive activities. We are organising the event in a manner so that the youngsters are inducted into the mainstream but also maintain our rich cultural heritage. This allows students to explore and learn from each other," Anand said.
He said that the students are very enthusiastic about their performances and have come fully prepared as this is a competitive event.
A number of officials from the army, civil administration, police force, teachers and locals also witnessed the event.
The participating students are also having a good time at the event.
"We got to converse with people from other regions and find out new things. We got a platform to showcase our talents and skills. The army encourages everyone to participate in the event. I am very happy and grateful to be a part of this event," Jagmeet Kaur, one of the participants said.
Students also showcased their performances in sports, cultural and fine arts performances. Traditional folk dance and a display by the military band were also performed in a patriotic fervour. (ANI)