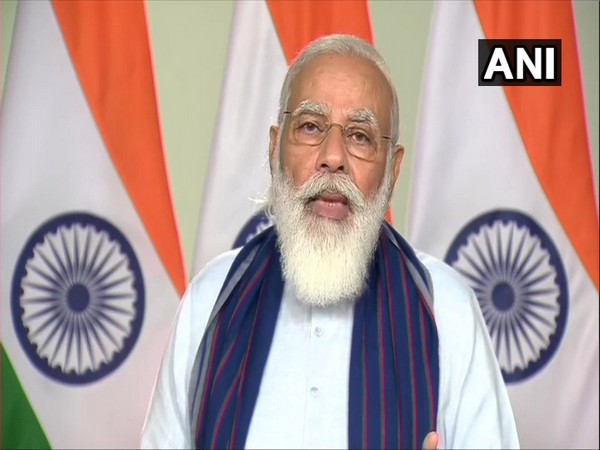 New Delhi [India], November 22 (ANI): In the one and half years since the start of the Jal Jeevan Mission, more than 2.6 crore families have been provided piped drinking water connection to their homes, Prime Minister Narendra Modi said on Sunday.

He said that under the Jal Jeevan Mission, the life of our mothers and sisters is getting easier due to easy water access at the comfort of their homes and added that it has led to a reduction of many diseases like cholera, typhoid, encephalitis caused by dirty water.
"During the last one and half years from the start of Jal Jeevan Mission more than 2 crore 60 lakh families have been provided piped drinking water connection to their homes including lakhs of families in Uttar Pradesh as well," PM Modi said after laying the foundation stone of rural drinking water supply projects in Mirzapur and Sonbhadra districts of Vindhyachal region of Uttar Pradesh via video conference.
During the event, the Prime Minister also interacted with Village Water and Sanitation Committee. Union Minister Gajendra Singh Shekhawat, Uttar Pradesh Governor Anandiben Patel and Chief Minister Yogi Adityanath were present on the occasion.
"In spite of having several rivers, these regions were known as the most thirsty and drought-affected and forced many people to migrate. He said now water scarcity and irrigation issues will be resolved by these projects and it signifies rapid development," Modi said.
The Prime Minister remarked when piped water reaches thousands of villages in Vindhyanchal the health of children of this region would be improved and their physical and mental development will be better. He said when one gets the freedom to take decisions and work on those decisions for the development of your village, it increases the confidence of everyone in the village. He added that self-reliant India gets strength from self-reliant villages.
PM Modi also complimented the Uttar Pradesh government for providing responsive governance during the time of pandemic and keeping the pace of reforms going.
Outlining the development works in the region, Modi said pointed to the provision of LPG cylinders, electricity supply, solar plants at Mirzapur, completion of irrigation projects and solar projects on uncultivable land to provide steady extra income to the farmers.
Referring to the Swamitva Scheme, the Prime Minister informed that verified ownership deeds for residential and land properties are being delivered to the owners leading to stability and certainty of titles. This is leading to assurance against unlawful encroachment of the property of the poor segment of society and improving the possibility of using the property as collateral for credit, he said.
Speaking about the efforts for the upliftment of the tribal population of the region, PM Modi said that schemes are reaching the tribal regions under special projects. Hundreds of Eklavya Model schools are operating in such regions, including in Uttar Pradesh, he added.
"The aim is to provide this facility to every tribal majority block. Projects based on forest-based products are also being implemented. The District Mineral Fund has been established so that there is no dearth of funds for tribal regions and the thinking behind such a scheme is that a part of resources generated from such areas are invested locally," he said.
PM Modi said that Rs 800 crores have been collected under the fund and more than 6,000 projects have been sanctioned in Uttar Pradesh. He also urged the people to remain alert against COVID-19 as the danger still lingers and asked the people to maintain basic precautions with great sincerity.
The projects, for which the foundation stones were laid, will provide household tap water connections in all rural households of 2,995 villages and will benefit about 42 lakh population of these districts. Village Water and Sanitation Committees/ Paani Samiti have been constituted in all these villages, who will shoulder the responsibility of operation and maintenance.
The total estimated cost of the projects is Rs 5,555.38 crore. The projects are planned to be completed in 24 months. (ANI)