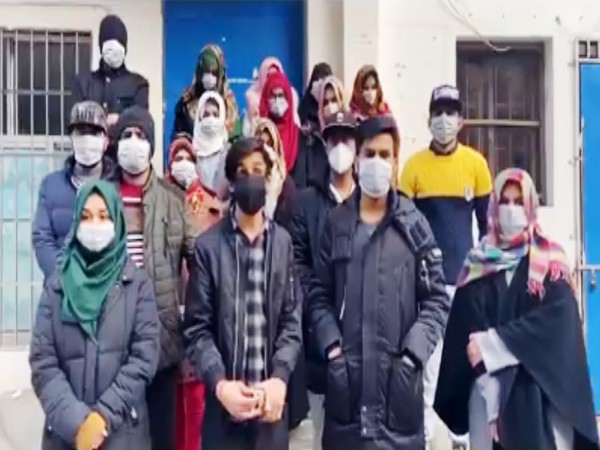 Islamabad [Pakistan], June 10 (ANI): Thousands of Pakistanis studying in China are waiting for Beijing to greenlight their return. Many are struggling because their stipends have been suspended, and fear they won't complete their studies on schedule.

Although Beijing has mostly brought the coronavirus pandemic under control and allowed other foreign students to return, Pakistani students completing their degrees in China have been unable to return to the country to resume their studies, reported DW News Agency.
Many Pakistani students were receiving fully-funded scholarships from the Chinese government, but the scholarships have been withheld by Chinese authorities for over a year now. The standard scholarship offers them a monthly stipend of 70,000 Pakistani rupees (Euro 372, USD 453) to 90,000 rupees.
"I left my job in 2019 to make use of this scholarship," Hina Fatima, a Lahore resident pursuing a PhD in food sciences at the Beijing Technology and Business University, told DW.
"I got stuck in Pakistan, am unable to find a job and am worried about how long it will take to finish my degree, which was scheduled to be completed in 2023," said Fatima.
"The Chinese authorities have also stopped my stipend, creating immense financial hardships," she added.
Abdul Saeed, a resident of Faisalabad pursuing a PhD in physics and chemistry at the University of Science and Technology of China, told DW that after quitting his job to study in China, the stipend was the only source of income for his family. He and his family have also faced hardships since the stipend was stopped a year ago, reported DW News Agency.
At the start of the pandemic, Pakistani authorities faced a widespread outcry as officials refused to evacuate students stranded in Wuhan, the epicenter of the virus.
Following weeks of domestic and international pressure placed on Prime Minister Imran Khan, the government relented and offered them a way back.
Most of the students returned to Pakistan in the early months of last year, but are desperate to go back to China to finish their studies.
They have asked Pakistani and Chinese authorities for an exact timeframe for their return, but officials haven't offered any firm answers, reported DW News Agency.
Meanwhile, there is widespread anxiety over degree completion. Usman Choudhary, a PhD student in Beijing, was planning to teach at a Pakistani university after completing his studies. However, it might take much longer than expected for him to finish his studies.
Nida Nawaz, another PhD student, echoed those concerns.
"I came back to Pakistan in January of last year after completing my first semester, and there is no chance of returning to China anytime soon," Nawaz told DW. "We cannot be admitted to Pakistani universities and are therefore unable to complete our degrees," she said.
Pakistan and China have enjoyed friendly ties for decades. Beijing has pumped billions of dollars into infrastructure projects under the China-Pakistan Economic Corridor (CPEC) initiative and has offered aid to Islamabad for a number of development schemes.
The two countries describe themselves as all-weather friends, but the Pakistani students feel that in their case, China is being discriminatory.
"China has allowed South Korean students to return, so do they not allow us to resume our studies?" Choudhary asked.
Most students are concerned by the lack of effective response from Chinese and Pakistani authorities. Ahmad Ali, 25, who completed his Master's degree and started a PhD program in China last year, said the Pakistani embassy in Beijing recently held an open meeting to address the issue. However, it yielded few results, reported DW News Agency.
Choudhary said he wrote to both his university and the Pakistani authorities, but their only answer was that they were working to resolve the issue. "We want concrete results, not a lukewarm response," he said.
A total of 492,185 international students from 196 different countries were studying in China in 2018, according to official figures from China's Education Ministry. (ANI)